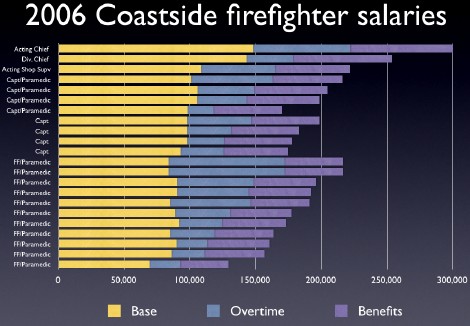 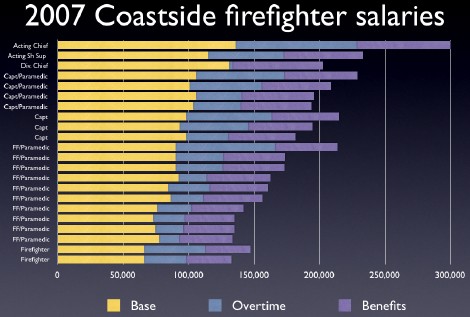 The compensation of the Coastside’s firefighters has been debated for years during the run-up to the votes to consolidate the Coastside districts and contract services to Cal Fire. But the actual figures have not been available to the public until now.

It is still critical that Coastsiders understand the compensation of its firefighters. The CalFire contracts are vulnerable to litigation or a referendum election. Also, the IAFF Local 2400 Officials have threatened recall of current Coastside Fire Protection District board members.

Recently, California Supreme Court determined that the the public has a right to salary information by name for public service employees. I submitted a public information request to the CFPD board and received a list of salaries without names for Calendar years 2006 and 2007.

Notes on the charts

In order to make the compensation numbers comparable, they do not include firefighters who worked less than a full year.

Administrative personnel and a mechanic have been removed from the data so that the only individually identifiable personnel are senior management.

There is no way to tell from the analysis how much of the overtime worked by Coastside firefighters was voluntary.

Benefits are fixed at 53% of base pay. Firefighters can retire at 55 with up to 90% of final salary with lifetime medical. Benefits should be considered as part of compensation for two reasons: (1) workers in the private receive retirement benefits in the form of a 401K plan that is deducted from their gross salary, and (2) many private sector workers, as well as the self-employed, pay all or part of their insurance.

You can download a tab-delimited text file of the original data suitable for importing into Excel or other analytical software from Coastsider.