HMB Safeway isn’t as expensive as you think, but it’s no bargain 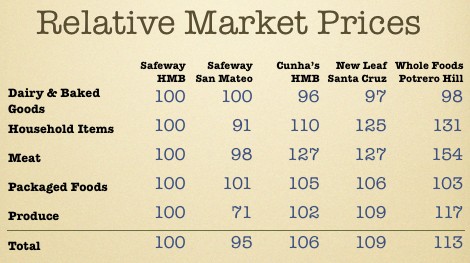 Correction: Kevin Barron correctly pointed out in the comments that we should have adjusted produce prices so that we were comparing price per pound rather than total price. We’ve updated the comparison. This brings the numbers for New Leaf and Whole Foods much closer to Safeway, which feels like good news to us.

Ever since Albertson’s closed last year, Coastsiders have been grumbling that the Half Moon Bay Safeway seems awfully expensive. Were they taking advantage of the lack of competition to raise prices? In two weeks in April, we shopped our local Safeway and four competitors, here’s what we discovered.

You can’t really compare the bottom-line prices at these stores fairly. We took pains to buy comparable items between stores, but it’s more difficult than you might think. Also, even though we tried to buy lowest common denominator goods, no two people are going to buy the same basket of goods. For more information, you can download our shopping list and individual prices in an Excel spreadsheet.

Dairy and baked goods were roughly equally priced at all stores, including Whole Foods, which we threw into the mix out of curiosity. Although we were tempted by some of Whole Food’s $20/pound cheddar when our shopping list called for Tillamook.

Household items, like Ziploc bags and foil, are cheaper at Safeway. But they’re even cheaper at Costco.

Meat was much cheaper at Safeway. It looked and tasted like it. Also, the service in Cunha’s and New Leaf’s meat departments was outstanding. If you’ve ever tried to buy anything that wasn’t already shrink-wrapped at Safeway, you know what we’re talking about.

Packaged foods didn’t vary much in price, but this is one area where you can be tempted by some pretty pricey merchandise with charming labels at the alternative markets. But if you’re looking for wide selection of processed food, Safeway is an excellent choice.

Produce was significantly cheaper in San Mateo. However, Cunha’s and New Leaf were highly competitive with Safeway in Half Moon Bay, and this is the other category where Safeway’s quality left a lot to be desired. Also, if we’d shopped at Safeway’s tiny organic section, the prices would have been a lot closer to one another.

The bottom line isn’t the price.

A couple of generations ago, the typical American household bought groceries from more than one store. It was a little more time consuming, but it was a lot more personal. That world is gone. Supermarkets killed it. But we may find that as it becomes less practical to fly our vegetables across the Equator, we’re moving toward something more local and more humane.

Safeway captures the essence of our modern world. It’s huge. It’s pimped up to look more like a Whole Foods. It has an olive bar with four different kinds of olives, after all. But the lines are long, the employees seem dazed and miserable, and the fresh food seems more depressing all the time.

You can still get something approaching a classic small-town experience at Cunha’s Country Store. You can cruise around the store in a couple of minutes, get what you want for dinner tonight and it’s a completely different experience from supermarket shopping. And it’s locally-owned.

New Leaf was also a revelation. As much as we love Cunha’s, we can’t wait for their store in Half Moon Bay to open. They’re buying local produce. The service, quality, experience, and variety were excellent. We talked to the personnel there and they were not only uniformly helpful, they told us once we engaged them in conversation that they were really happy to be working there.

Then there’s Whole Foods. The quality of much of their food is exciting, but the presentation and atmosphere is so overheated it borders on pornographic. It certainly doesn’t feel as sustainable as their image implies. Go there for the cheese.

What’s missing from this analysis is the Coastside Farmer’s Market, which is not a direct competitor. You won’t find aluminum foil, or potato chips, or hamburger there. But if you haven’t spent a Saturday morning buying produce from local farmers, you’re missing an important opportunity to do yourself a favor while helping your community.