Just the facts: Where’s the water for CCWD?

Paul Perkovic is Board President of the Montara Water and Sanitary District (MWSD), however this article reflects his individual views and does not indicate a position of the District.

Coastside County Water District (CCWD) is at the limits of its ability to serve the needs of its current customers and may have serious problems meeting the demands of planned growth in its service area, even if there is no drought in the foreseeable future. 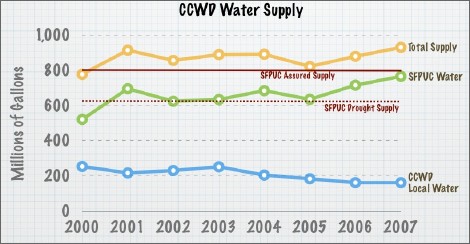 Source: Table I, Annual Production of Water Supply Sources in MG, 1997 - 2007, from the Water Supply Workshop.
Click for larger version of this chart.

This chart summarizes the current situation as described by CCWD in a Water Supply Strategic Planning Workshop on Thursday, June 26. CCWD serves water users in Half Moon Bay and El Granada. Moss Beach and Montara are served by the Montara Water and Sanitary District (MWSD). Growth in water demand from 2000 to 2007 has required CCWD to supply 20% more water for its customers, as shown by the yellow line.

CCWD buys 82% of its water from the San Francisco Public Utilities Commission (SFPUC), shown by the green line. SFPUC water comes from Pilarcitos Lake and the Crystal Springs Reservoir, which is fed from the Hetch Hetchy dam near Yosemite, via a complex system of reservoirs, pump stations, and pipelines.

CCWD’s local supply comes from wells near Pilarcitos Creek, which runs through Half Moon Bay, plus wells near and surface diversion from Denniston Creek, just north of El Granada. CCWD’s production is shown by the blue line.

This planning scenario anticipates a significant cutback in water from SFPUC (all member agencies would share in this cutback during a severe drought) combined with the historic low yield from local sources.

What is CCWD’s drought plan?

Comparing the source and quantity of water supplied by CCWD in 2000 and 2007 shows:

These trends are simply not sustainable, even for a few more years. CCWD appears to be on the brink of a water supply disaster, which the current drought situation only magnifies:

CCWD has a drought scenario based on expected cutbacks in SFPUC water during a severe drought and the historical low yield from local sources. That planning scenario expects CCWD to have only 620 million gallons available – to meet current use of 931.68 million gallons. In other words, CCWD customers already use 50% more water than CCWD expects to have available in a severe drought.