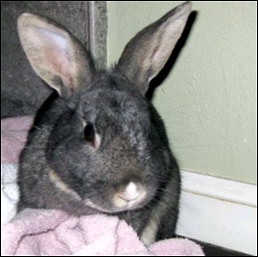 Three nights ago a bunny was hit by a car on our street in Montara. Its little friend witnessed it and tried to help. when my daughter came upon this scene they were huddled together in the street. The uninjured bunny was trying to cover the injured one with his body, trying to push it up and standing between it and the oncoming cars. It was a heart breaking scene. The injured rabbit died.

With difficulty she caught the uninjured bunny, put it in a cage and took to our home. When who we thought was the owner showed up, he informed us that the rabbits were found in the lot behind his house. The bunny pair was loose and had been hopping around at will for months. There don’t seem to be babies involved so we think the bunnies were both the same sex or neutered.

We have the rabbit in a warm bathroom with food and water. The bunny is shy but when offered food around will allow us to pet and even hold him.  Remarkably, he/she appears to be in very good health except for some matted fur.  We learned that bunnies form bonded pairs and can become distraught and ill if separated but he/she seems to be doing OK.  It is a domestic dwarf bunny, mostly gray with white and very cute.

We are looking for someone with experience with rabbits to adopt this courageous little bunny. We work full time and have 3 cats and 2 dogs - all rescues and adoptions, plus a horse. We just don’t have the room or time for another animal. All the rescue societies we have contacted are overflowing with unwanted rabbits. If you know someone who can adopt or foster this bunny please call us at 728-1318.

Thanks for taking the bunny in Florie.  I already have my hands full with 4 adopted rescue cats but hope someone can give this courageous survivor a loving home.

I simply don’t understand why the pair of bunnies was running loose in the first place ..

Thank you for rescuing this bunny. I have been trying to find him/her a home ever since I saw your article, but so far, haven’t found anyone. I have three dogs and a cat, all rescues, and my cat would not be a good match because he is, unfortunately, a real hunter, even with a bell on his collar. I have your story posted at work and my coworkers have said many kind words about you and send their hopes out for the bunny. You might consider posting an ad at Cafe Lucca. Or there are animal sanctuarys, even out of state, that might have an opening. I could help you look for a good place if you like. Again, thank you and your daughter for your kindness.

Hi, I have been emailing with Florie and she shared the good news that the bunny found a new home with a Montara family.

Actually, the bunny ran away and is again running around the outback of Montara.  We could not catch him but will take him back if anyone else does…

Are these the same ones who used to roam the streets around George and Birch? They’ve been missing now for a few weeks.

I was under the impression that one of the houses owned the animals and had a shelter for them.