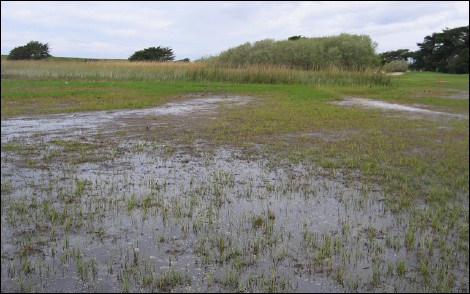 http://www.restoresharppark.org
Normal winter rains flood many areas of Sharp Park, and the Golf Course's attempts to drain the water kills California red-legged frogs, the largest frog in the West.

In his April 27 opinion piece on Coastsider, Ken King makes several false statements about Sharp Park, the restoration proposal for the land, and the bill introduced by Supervisor Mirkarimi to kick-start that proposal.

Every environmentalist has demanded that scientific studies be conducted before any decision about Sharp Park’s future is made, including decisions about Sharp Park’s illicitly built and crumbling sea wall.  The Mirkarimi bill expressly requires, based on the best scientific evidence available, that a restoration study be conducted along with alternatives that retain or redesign the golf course.  The bill will force these studies to be integrated into the EIR process referenced by Mr. King, but it will modify that process to ensure that restoration alternatives are considered along with existing alternatives that keep things largely as they are.  Mr. King has steadfastly opposed restoration studies, because for political and personal reasons he doesn’t want the status quo to change.

But the status quo cannot be maintained.  The golf course loses too much money, it causes too much harm to the environment, and it exposes the surrounding community to flooding risks that will be exacerbated by climate change.  In the face of these liabilities, subsidizing golf in San Mateo County for as little as $12 a round while San Francisco makes drastic cuts to basic city services simply cannot continue.

Mr. King proposes a simplistic solution: raise prices.  But if Sharp Park raises prices, fewer golfers will play there and the course’s deficit will increase.  The Bay Area already supplies 6 million more rounds of golf than golfers demand, driving golf prices downward precisely when Mr. King claims we should raise them.  Moreover, the National Golf Foundation found that golfers at Sharp Park have very little loyalty to the course and play there primarily because it is cheap. Because of this, San Francisco’s Budget Analyst concluded that Sharp Park cannot reduce its deficit by simply raising prices: golfers will just take their game elsewhere.

And Sharp Park’s deficit is substantial. Sharp Park has lost between $30,000 and $300,000 a year for the past four fiscal years from the golf fund alone. San Francisco’s other golf courses suffer for it, because they must subsidize Sharp Park’s losses, robbing other courses of needed maintenance. But that isn’t all it costs San Francisco to operate Sharp Park: Sharp Park also draws down the capital fund, the open space fund, and the natural areas program fund. In 2007, the Recreation and Parks Department concluded that these expenses will not be offset by revenue from Sharp Park, collectively resulting in millions of dollars in losses by 2013.

This may be chump change compared to San Francisco’s multi-billion dollar budget, but if this hemorrhaging were halted San Francisco would not need to make proposed cuts to City services, services that are already distributed inequitably. These funds could keep our community centers open after school so kids will have a safe place to stay until their parents return from work.. They could even be used to improve San Francisco’s other golf courses that are suffering from deferred maintenance, or improve our playgrounds and dog parks to make them safe.

On top of all this, the scientific evidence makes it abundantly clear that Sharp Park golf course is the cause of harm to endangered species, not the cure for it.  The San Francisco garter snake, arguably the world’s most beautiful and imperiled serpent, was considered "abundant" at Sharp Park in surveys conducted in the 1940’s—before the sea wall was built—but has declined precipitously in surveys ever since.  In 2006 a US Fish and Wildlife Service report concluded that a San Francisco garter snake was killed by a lawn mower at Sharp Park, and in 2008 only one snake was seen at Sharp Park all year.  The golf course has yet to implement a single mitigation measure for the snake.

Also in 2008—three years after mitigation measures for take of the California red-legged were reluctantly implemented by the golf course—biological investigators found "several" desiccated California red-legged frog egg masses at Sharp Park.  This year investigators concluded that, subsequent to a $240,000 repair of the golf course’s pump house, entrainment of the frog’s egg masses and tadpoles can occur, sending them out to sea.

Environmentalists have been consistent in their message: use the best available science to consider restoration alternatives at Sharp Park before political deals are cut about the future of the land.  With this information we can select the best choice for everyone at Sharp Park, including golfers, endangered species, and other recreational users of Sharp Park.  The Mirkarimi bill will kick-start this process, and deserves support because of it.