Letter: Water crisis coming in the western US

Letter to the editor
Posted by Ric Lohman on Fri, February 1, 2008 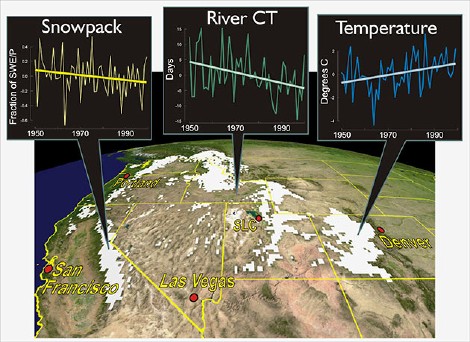 Wired.com
Click for full-size image and related article at Wired.com

A study published Thursday in Science magazine portends "a coming crisis in water supply for the western United States."

The study is likely to add to urgent calls for action already coming from Western states competing for the precious resource to irrigate farms and quench the thirst of growing populations. Devastating wildfires, avalanches and drought have also underscored the need. Researchers led by climate expert Tim P. Barnett at the Scripps Institution of Oceanography at the University of California, San Diego, studied climate changes in the West between 1950-1999. They noted that winter precipitation falls increasingly as rain rather than snow, snow melts faster, river flows decrease in summer months, and overall warming is exacerbating dry summer conditions.

The researchers used statistical modeling to compare climate changes that would have happened with natural fluctuations over time, to climate changes with the addition of human-caused greenhouse gases and other emissions from vehicles, power plants and other sources. They found that most changes in river flow, temperature and snow pack between 1950 and 1999 can be attributed to human activities, such as driving, that release emissions including carbon dioxide and other greenhouse gases into the atmosphere.

The changes they observed differed significantly from trends that could be attributed to natural fluctuations between wet and dry periods over time, they said.

"The climate’s changing in the West. We’ve known that. The question is why, and no one’s really addressed that," Barnett said in an interview. According to his study, "The answer is it is us." "The picture painted is quite grim so it’s time to collectively sit down and get our act together," Barnett added, suggesting the need for conservation, more water storage, and a slowdown on development in the desert Southwest.

"The building is just going crazy, so it would be a pretty good idea to put a curb on that unless they can figure out how to get more water," he said.

The study also included researchers from Lawrence Livermore National Laboratory, the University of Washington, Seattle, and the National Institute for Environmental Studies in Japan.

"Our results are not good news for those living in the western United States," they conclude. The research "foretells of water shortages, lack of storage capability to meet seasonally changing river flow, transfers of water from agricultural to urban uses and other critical impacts."

Here’s what I don’t understand about this:

1. We have known about this for a long time.
2. The West is not the only area facing shortages of fresh water in the future.
3. In 1999, after Turkey was struck by an earthquake, we sent over 2 navy ships with onboard desalination plants that could produce 100,000 gallons of fresh water daily. So clearly we have the technology, and land-based desalination plants could produce 100 times that amount or more.

So why are we hearing so little about desalination? There is one Bay Area plant planned, but it’s still being wrangled over and not yet begun. It seems to me that the US needs to start a program to ring the country with solar- and/or wind-powered desalination plants all along the three coasts, and a system of pipelines to deliver it to every area of the country that will be running short of water—and we need to do it now, before we actually start running out.

Last year Marin looked into building a 5 mil. gal. per day plant, expandable to 15 mil. gal., and found it would cost only $115 mil. to build.

What we are currently spending in Iraq would more than pay for it. And just look at what happened in Georgia this summer to get a modest preview of what we are facing as a nation. This should be a very high priority for our country, yet you never hear it mentioned by the presidential candidates or much of anyone else. Why is that?