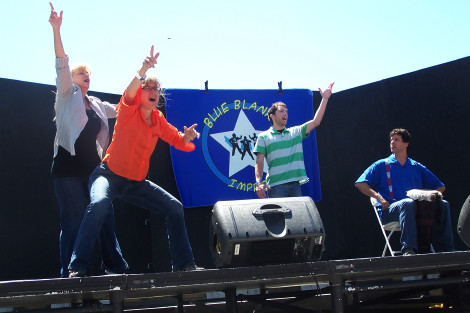 Improv Comedy Show Saturday
Who: Blue Blanket Improv
When: Saturday, June 12, 2010 at 8:00 PM; doors open at 7:30 PM
Where: Enso Studio, 131 Kelly Avenue, Half Moon Bay, CA 94019
How: Buy your tickets for $10 at the door or go to http://www.brownpapertickets.com/event/98016
What: Graduate to the next level of comedy this month and join Blue Blanket Improv (BBI) for the father of all comedy shows. Featuring our patented laugh-out-loud, high-energy, affordable, fun-for-the-whole-family comedy theater experience, BBI will gift-wrap some special comedy goodies for this month’s dads and grads.* Instead of giving dad yet another necktie for the Father’s Day this year, give him the gift of laughter. And we’re sure your grad would much rather receive tickets to an uproarious comedy improv show, created on the spot with scenes based entirely on audience suggestions, than some boring trip to Europe or a time-hogging new iPad. Blue Blanket Improv performs on the second Saturday of each month in Half Moon Bay, and it’s never the same show twice, so present your dads and grads with this month’s hottest gift idea: improv comedy.
*BBI comedy stylings not actually patented; patent not even pending.