Coastsider’s navigation bar now features a list of weblogs by coastside residents. The only requirement for inclusion is that the blog should be updated from time to time and that it have some local connection. Some of these sites are not all that local in content, but have enough about their authors’ personal lives that they have a coastside flavor.

I’m hoping that our readers know of more or that I’ll inspire some coastsiders to start their own blogs.

The Surfrider Foundation has turned an old garage into a water-quality testing lab, according to the San Mateo County Times. The lab, which opens Saturday, is located in a garage on the at the end of Stanford Avenue in Princeton [Map], is owned by Sewer Authority Midcoast and leased to Surfrider at no cost.

Surfrider’s 14-member Blue Water Task force has been collecting water samples from 32 sites and taking them to the County’s Department of Health for analysis. The information is used to close beaches and warn the public. Beach and water closures are posted on the County’s web site. The new lab should help the task force get that information to the public sooner.

A self-taught meteorologist builds the top weather site for surfers

The Mercury News profiles Mark Sponsler, surfer and self-taught meteorologist whose Web site Stormsurf is considered the No. 1 source of big-wave forecasts on the Pacific Coast. Sponsler consults on the scheduling of Men Who Ride Mountains at Mavericks.  Sponsler makes the point that remote sensing and forecasting make it possible to have a job, live a little further from the ocean, and surf.

A pedestrian is killed near HMB Airport

A pedestrian was struck and killed near the Half Moon Bay Airport Saturday, around 9:54 p.m.,  at Airport Road and Los Banos Avenue [Map], by a vehicle driven by Tammy Houston of Half Moon Bay. Houston, who left the scene to call for help, was arrested on suspicion of driving under the influence.

Question for our readers: I thought pretty hard before carrying this story. It’s newsworthy, but I’m not sure I’m prepared to record every traffic death or every body washed up on coastside shores. I’d be interested in whether you want to see this coverage on Coastsider. Let me know what you think.

MROSD opponents have produced 5,344 petitions. What comes next?

Citizens for Responsible Open Space produced 5,344 signed petition cards to put the expansion of the MROSD (Midpeninsula Open Space District) up to a vote. The petitions were delivered to the LAFCo meeting today at the Ted Adcock Center. While it’s unclear whether they will have the roughly 4000 signatures they need to put MROSD’s expansion on the ballot, after duplicates, invalid signatures, and requested removals have been eliminated and this weekend’s signatures have been added, they certainly appear to be in the ballpark.

If there is an election, we’ll be covering it in depth, from both sides, on Coastsider. But this is a good occasion for me to say a few things that have been on my mind. I’ve been silent on the petition so far, unless you count the "Decline to Sign" sign in my front yard.

Illustration: MROSD’s boundaries, which currently barely cross Skyline, would be extended to the coast under the proposed annexation.

Coastsider now lists community events in the right-hand column of every page, just below the ads. My goal was to make the information prominent on the site and make better use of the right column.  Coastsider should have enough space to feature one week’s worth of general community events. This is an experiment, both in form and content, and your feedback is welcome.

Assemblyman Leland Yee has introduced a bill that would impose a $150 fine for smoking or discarding cigarette butts on any of California’s state beaches. Yee said the bill was intended to reduce litter: "We don’t have enough resources to keep our beaches clean, so if there’s a way to prevent the dumping of this garbage, these cigarette butts, we should do that." Smoking is already banned by local ordinance in Malibu, Santa Monica, Los Angeles, San Clemente, and Solana Beach.

This bill would apply on many beaches on the Coastside, including Gray Whale Cove, Montara, Half Moon Bay, San Gregorio, and Bean Hollow State Beaches.

Seven year old Maria Perez was struck by an RV near Hatch Elementary School, at the intersection of Pilarcitos and Kelly Ave [Yahoo Map]  on Thursday at 8am.  Perez, seriously injured, was taken to San Mateo County General Hospital, where she was pronounced dead.

The Chronicle says that although the driver apparently stopped at the crosswalk, the design of this intersection may be partially at fault:

Residents have complained about the area along Kelly Avenue near Highway 1 and Pilarcitos Avenue, saying the combination of vehicle congestion and high foot-traffic use—with students walking to and from Hatch Elementary and Cunha Intermediate School—was a dangerous mix.
...
Cabrillo Unified School District Board Member Dwight Wilson said the accident probably will renew debate on possible crossing guards or police supervision for Kelly Avenue. He said the district considered organizing crossing guards two years ago when it stopped busing but dropped the issue because of funding and liability concerns.

Visit the intersection. Kelly at this location is clearly more suited as an access road to Highway 1 than it is for pedestrians.

Donations for the family can be sent to:

The Lutheran book sale is Saturday, May 29

I just dropped off eight boxes of books at the Coastside Lutheran Church for their book sale, which begins at 9am on Saturday. I plan to get there early before all the good books are gone.

This is the second year they’ve conducted the sale. The church is located at 900 N. Cabrillo Highway, a little north of the 92. 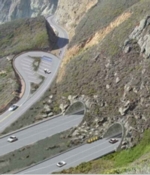 On Wednesday night, the county Board of Supervisors unanimously approved the last major permit for the Devil’s Slide bypass tunnel. Tunnel opponent Oscar Braun says he will file an appeal with the Board before the October 15 deadline.

The Mercury News reports that "Caltrans had to clear myriad hurdles ranging from protecting a shaggy wood rat that lives nearby, to bridging a red-legged frogs’ pond, to designing tunnel portals that satisfy nature-loving tastes of coastal residents. "