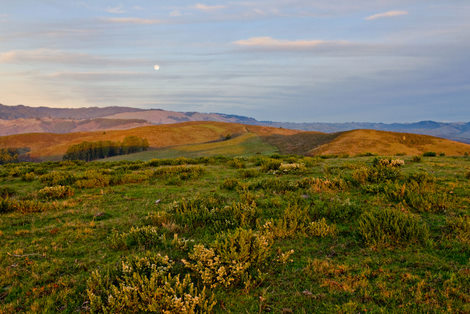 © Neal Kramer. Courtesy of POST.
View from the 32 acres above Half Moon Bay

On December 31, POST purchased 17 acres near Moss Beach at Pillar Point. Informal trails have crossed this private property for years; eventually trails will be improved and opened officially to the public. Said Moore, "The property offers a logical future extension of the segment of California Coastal Trail just completed on POST’s Pillar Point Bluff property nearby."

POST bought the land for $1.825 million from private owners Pillar Point Preservation Partners. Just west of Highway 1, the land is part of the scenic backdrop of open hills visible from Highway 1 near Half Moon Bay Airport. It is adjacent to Fitzgerald Marine Reserve and to land owned by the United States Air Force as well as San Mateo County Parks. Located next to Pillar Point Marsh wetlands, the largely coastal terrace prairie terrain is rich in native plant and wildlife habitat considered rare and sensitive by the California Coastal Commission. "Had POST not stepped in to protect this land, it might have become three home sites blocking access to this portion of the bluff," Rust said.

The largest of the recently acquired properties is Toto Ranch, 952 acres rising up in a series of gentle, grassy slopes along the east side of Highway 1 north of San Gregorio. In a generous bargain sale concluded December 24, Kathleen Scutchfield of Woodside sold the ranch to POST for $3 million. The appraised value of the ranch is more than $7 million; the difference between the appraised value and the sale price is considered a charitable gift for tax purposes.

POST’s purchase of Toto Ranch—one of the largest remaining open space properties on the Coastside—is the result of a longtime relationship with Scutchfield, who last year donated a conservation easement over the ranch to POST. That easement limited the property’s development potential so as to protect natural resources including critical wildlife habitat, important watershed land and panoramic views of the San Gregorio and Tunitas Creek valleys.

"Highway 1 along the San Mateo Coast is a scenic thoroughfare unlike any other in the United States. The acquisition of Toto Ranch, brimming with natural resources, means a significant stretch of this road will maintain its breathtaking impact," said POST President Audrey Rust. "We are immensely grateful to Kathy Scutchfield for her ongoing generosity to POST. Luxury estates could have covered Toto Ranch as a result of subdivision, but thanks to Kathy’s easement gift and now this bargain sale, this sweeping coastal landscape will be protected forever, avoiding any future threat of development."

With nearly 200 acres within the Tunitas Creek watershed, Toto Ranch has significant impact on the health of the watershed and of habitat for threatened and endangered animals such as steelhead trout, Coho salmon and California red-legged frogs. The property is also home to bobcats, coyotes, mountain lions white-tailed kite, peregrine falcons, Cooper’s hawks, sharp-shinned hawks and golden eagles. The ranch has a long history of grazing, with a cow/calf operation, sheep and goats pastured there in recent years. Title to the ranch gives POST a chance to steward natural resources on the land while looking for a new conservation owner capable of managing the property long-term. Said POST Executive Vice President Walter T. Moore, "It is remarkable to find a large, intact property like this on the Coastside with easy access to paved roads that has not been parcelized or disturbed by any kind of building."

32 Acres above Half Moon Bay

POST purchased the 32 acres in Half Moon Bay on December 23 from private owners for $650,000. The land sits near the top of Skyline Ridge and connects Mills Creek Open Space Preserve and Burleigh-Murray State Park. "This strategically located parcel, situated at the heart of 1,600 acres of already protected public lands, shows what a big difference protection of a small property can make," said Rust. "By protecting this land, we can make sure that recreational trails can be connected, animals can roam freely and people can enjoy uninterrupted views of the Coastside."

On a clear day, downtown Half Moon Bay and adjacent open lands including POST-protected properties Johnston Ranch, Madonna Creek Ranch, Pillar Point Bluff and Wavecrest are all visible from the property. Twinberry, coyote brush and lizard’s tongue grow profusely on its steep slopes, and dense coastal scrub and Douglas fir top its ridges. All 32 acres are located within the Arroyo Leon watershed, and seasonal Leon Creek runs through the property’s lower portion, providing habitat for steelhead trout, California red-legged frogs and San Francisco garter snakes. Within the next two years, POST anticipates transferring this property to a public agency for long-term protection.

Thank you to POST, its generous contributors, and to the previous owners of these lands for making it possible to keep them as public trust lands available to the growing population in the rest of California.

I’m particularly pleased that POST is buying the connector properties that will allow users to move between public spaces. I do worry, though, about the number of times that we hear that POST has acquired one of the largest properties remaining on the coast. Sometimes it seems as though tiny in-holdings will be all that’s left to the private property holders.