Why you should care about substandard lots

This El Granada house isn't much wider than its garage and is just about as wide as its narrow lot, with a walkway on either side. 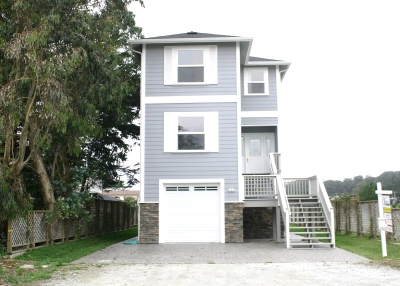 This Miramar house and the one in the next picture are back-to-back on narrow lots. 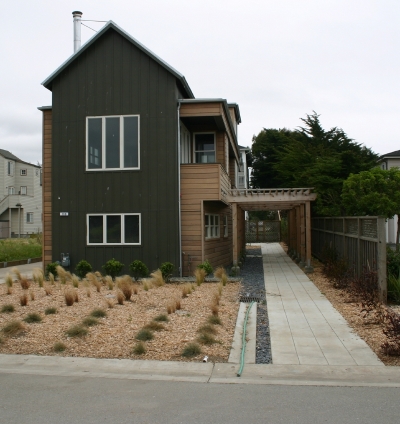 San Mateo County is proposing changes to its Local Coastal Plan (LCP) that could dramatically affect the quality of life in the unincorporated Coastside. By making it easier to build on substandard lots and by exempting more houses from its size requirements and annual growth limits, these changes could completely change the texture of our community.

What is a substandard lot, anyway?

One of the most important issues in the current revisions of the LCP’s for Half Moon Bay and the unincorporated Mid-Coast is how substandard lots are handled.

The size of a standard lot is set by zoning. In most areas of the Coastside, a standard lot is 5,000 square feet, usually 50 feet wide by 100 feet deep. Under long accepted Land Use Planning and Procedures Law, it’s easier to develop a standard lot than a substandard lot because less staff review, public hearings and board consideration is required when lots conform to current regulations.

Thousands of small lots (25 square feet wide) were created on the Coastside when larger units of land were “subdivided” a hundred years ago. Subdivision is not a public process. It’s done by land owners so they can sell their land to multiple buyers.

Subdivision alone creates no right to build anything. That requires a permit and public process. Subdivision does mean that the land owner has submitted a “subdivision map” to the governing land use agency and that the map was approved, allowing the subdivided pieces of land to be individually sold.

Ideally, the land use planned in the subdivision map is consistent with land use plans and zoning. But, over time, these can diverge.

Zoning says how those lots can be developed

Zoning is the set of physical rules and standards by which a General Plan’s vision is implemented.

Zoning regulates the type and intensity of land use, and should serve public goals by keeping compatible uses together and to separate incompatible uses. Zoning should be orderly, compatible and conducive to the public health, safety and welfare. For example, one might not want to put pork rendering plant next to homes or a rifle range next to a hospital.

Since thousands of lots from the Coastside’s antiquated subdivisions are smaller than the minimum zoning requirement of 5,000 square feet, they are legally “substandard”. This does not mean unusable but rather “usable with care” so as not to harm the public interest by causing undue crowding, traffic congestion, demand for public services, pollution, environmental damage, crime, noise, etc.

Ninety percent of the substandard lots on the Coastside are located in the unincorporated Mid-coast, which is controlled by San Mateo County.

The county now requires only a “Use Permit” to develop on a substandard lot. This means a public hearing to determine if (1) the applicant has made a good-faith attempt to acquire adjacent land so as to make the building site standard and (2) the proposed development would not harm affected property owners or the public interest.

The county doesn’t enforce the good-faith requirement, and assumes no harm in the case of a single house. This ignores the long-term implications of a death by a thousand cuts. However, at least the “Use Permit” process puts the process out in the open, allowing public input and Coastal Commission appeal for egregious abuse of the public interest or precedent-setting cases.

What is the county proposing?

In its proposed changes to its LCP, the county proposes to make it even easier to develop substandard lots. The new LCP would make any substandard lot of 3,500 square feet or greater yet under the Zoning Lot Minimum Requirement of 5,000 square feet considered “buildable, as a matter of right” and only require a “Use Permit” for lots under 3,500 square feet. This would gut the central purpose of zoning and eliminate any possibility of public hearings and Coastal Commission appeals for thousands of future houses affecting current residents.

What’s the alternative and what can you do?

In contrast, the county is moving toward treating substandard lots as if they were standard. The coastal Commission already rejected this approach in 1998 during the county’s ill-fated Coastal Protection Initiative. It is highly debatable whether Mid-Coast residents would politically support the county’s approach if they knew about it. The time to speak up for an all inclusive Growth Control and Proportionality Policy is now as the next Board of Supervisors’ Public Hearing on the county’s LCP is set to take place in July. Send your written comments to the county Board of Supervisors asking that your comments be made a part of the Official county Record regarding the county’s LCP Update as follows:

President Richard Gordon and Members of the Board of Supervisors Hall of Justice and Records 400 county Center Redwood City, CA 94063

The Board of Supervisor’s want to pack as much housing as possible into the Midcoast. Their plan goes something like this:

1. Loosen up the restrictions for building on substandard lots.

2. Designate substandard lots as “affordable housing,”  even though these things will likely sell for at least 500k.

3. Exempt all “affordable housing” from the growth rate limitations being proposed in the LCP update.

This is just one part in a grand scheme to help their friends (developers/builders/realtors) exploit the Midcoast for financial gain.