Enrollment in the Cabrillo Unified School District (CUSD) may be about to increase for the first time in a decade if recent demographic trends continue, and the school population is about to become majority Hispanic.

Is the district, or the community, ready for these changes?

The total enrollment of CUSD grew at a fairly rapid pace until it peaked around 1997-98. It has been declining steadily ever since. 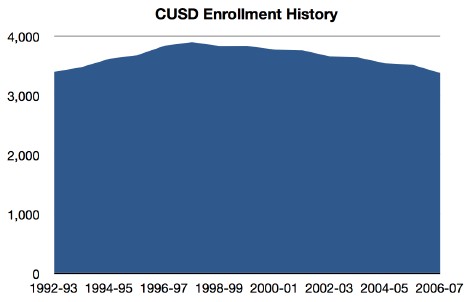 In 1996, the district forecast its enrollment of 3,900 would grow to 5,200 in 2008, and it planned for an aggressive expansion in its facilities. Today, the actual enrollment is 3,300. The steady fall in enrollment has taken a good deal of facilities pressure off the district.

The reasons behind the fall in enrollment are a subject of some debate, with flight to private schools and demographic changes being the most popular explanations.

But, the overall enrollment numbers don’t tell the whole story. 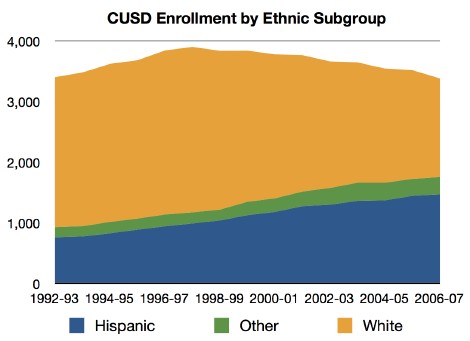 White enrollment has dropped rapidly since its 1996-97 peak. Meanwhile, Hispanic enrollment has grown steadily. Other subgroups have held relatively steady, at least as a group.

In the last 15 years, district white enrollment has dropped from 73% to 46% of the student population, while Hispanic enrollment has grown from 23% to 45%.

Countywide, where black and Asian students are a larger share of enrollments, the trends are generally similar, but all the trends are much less pronounced. 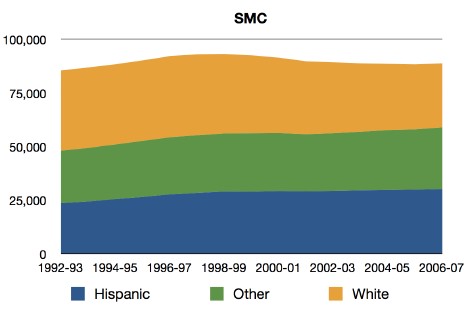 If we assume that the total enrollment will continue its current trend, we’d expect the district’s enrollment to continue to decline.

But if we project our three subgroups independently, we see a very different picture. White enrollment continues to decline, but the Hispanic enrollment is about to add more students than white enrollment is losing, reversing the decline in the very near future. Total enrollment may have bottomed out, having dropped by only seven students in 2008. 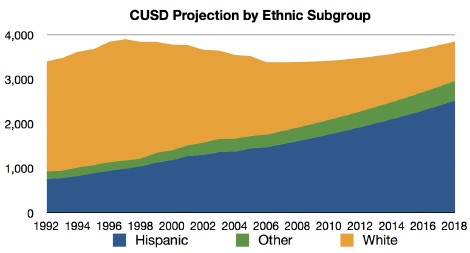 Hispanic enrollment is likely to overtake white enrollment by this fall, and it will be more than half of district enrollment in two years.

This analysis doesn’t consider new changes in demographic trends, the bursting housing bubble, changes in local employment patterns, and the state of the economy generally. But the basic trends have been consistent for a decade now.

While the district generally seems to be well-intentioned, there is little indication they are equipped for a dramatic shift in their student population. There have been no Hispanic members (or even candidates) on the district’s board in recent memory.

There are some encouraging signs, though. The new El Granada and high school principals have strong bilingual experience, and there have been impressive performance gains among El Granada Elementary’s Hispanic students. We’ll look at this in a future article.

I’m curious about the last two charts in your analysis—the ones that project enrollment out ten years. Although you cite Ed-Data as the source for the charts I didn’t see the projections there so I’m assuming they are yours.

Could you share the methodology you used to develop these?

I see that your charts differ in enrollment by about 1000 students (You used different methodologies for each chart? Or the same methodology produced different results?) and also that not only will Hispanics be a majority (Hispanics are almost there now, of course) but by 2018, in ten years, they will constitute about two thirds of the student body with Whites making up only about 25% or so.

Those are dramatic changes, as you suggest, but I’m puzzled why you didn’t attempt to include such obvious factors as the ones you list: “new changes in demographic trends, the bursting housing bubble, changes in local employment patterns, and the state of the economy generally.”

These left-out factors might prove very important. For example, the rise in home values over the past ten years probably contributed to “white flight,” allowing parents to borrow against their rising home values to pay for expensive private schools. That might not be so easy now and that change in borrowing ability might contribute to a decrease in the rate of “white flight.” Or even an increase in White enrollment.

I just looked over the historical charts for home prices in California and it seems the escalation (the “bubble”) started right about the time that White enrollment began its decline. The possibility of a correlation is intriguing and if so would certainly have a big effect on any projection—and would work against your conclusion.

If you left out all of these factors I’m curious about the ones you *did* include. Can you tell us more about your projection methodology?

Thanks for the chance to provide a few footnotes. Yes, the projections are my own. They’re a simple extrapolation of the last ten years of change, which have been fairly steady. This is essentially the methodology used by the district’s 1996 master plan. I’d take it with a large grain of salt, especially given our experience with *those* projections, which turned out to be wrong.

I don’t claim any special powers of prediction here. If you like, read my projections this way: *if* current trends continue, this is what is likely to happen. If not, not.

Why not take other factors into consideration? I don’t know how we’d manage to come up with plausible numbers. Will a recession cause coastside residents to move their children from private to public school? That requires reliably predicting the length and depth of this recession—if indeed it is one. If you think you can do that, and reliably calculation the effect on CUSD enrollment, be my guest. But I’ll point out to you that the last ten years include the bursting of the tech bubble, which didn’t seem to have a noticeable effect on CUSD enrollment trends.

Census-based data isn’t very helpful, since it’s basically projections based on an every-ten-year sample. Hospital data? Which hospitals? How many home births are there on the coastside? Are detailed birth statistics, including home addresses, available from hospitals? I hope not.

Perhaps your point is that the district itself should be taking a closer look at its own demographics. If so, I entirely agree.

As to the two different projections, I’m sorry that my point didn’t come through more clearly. The first projection (fourth chart) projects top-line enrollment. That figure has been steadily dropping, and so does the projected enrollment.

The second projection (last chart) projects the three subgroups individually, and adds up the result. As you see, in this case, growing Hispanic enrollment eventually overwhelms falling white enrollment.

To a very large extent, the projections are little more than a curiosity. Those who have a better crystal ball than I do are free to argue with them. But the projections shouldn’t overshadow the simple fact that *today* we have for all intents and purposes a half-Hispanic district, and the district needs to adapt.

A five-year update to my original numbers: no change in trend, with overall CUSD enrollment at a new low since its 1997-98 peak. The trends were briefly reversed in 2009-10, perhaps as a result of the recession, but that reversal was itself reversed, and then some, the next year.

The new trend is for voters to approve more and more money for fewer and fewer students.