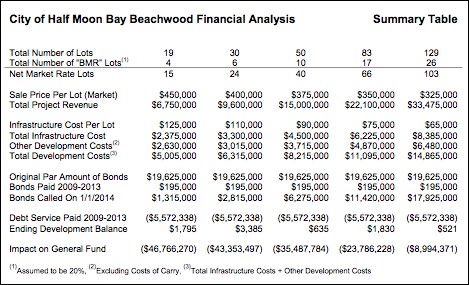 The city of Half Moon Bay has released a financial analysis of the cost of developing Beachwood should the state legislature decide not to accept its settlement.

We’re going to dig more deeply into these numbers in the near future, and we’ve already got some ideas about what to do, but tonight, you can download the Piper Jaffray’s analysis [pdf] and an Excel spreadsheet of their numbers from Coastsider.

What do you think of the city’s numbers? What would you be considering if you were presented with this analysis? Add your thoughts in comment to this story and we’ll add your ideas to our analysis of the city’s analysis.