Is MCTV worth saving? Part II: Follow the money 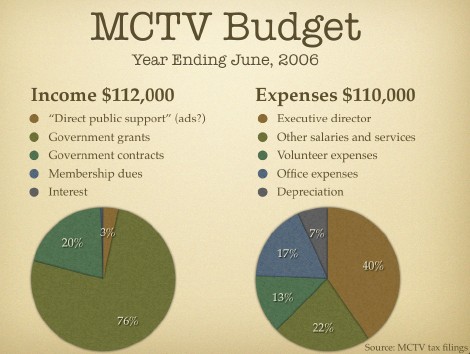 I didn’t learn much in business school, but I did learn that if an employee is not behaving in the best interests of the organization, it’s a pretty good bet his compensation program is structured to encourage it.

When you look at MCTV’s budget, you can begin to see why they don’t talk to the community or even listen. MCTV’s not returning my messages, so this is my personal analysis of their tax returns.

Three quarters of MCTV’s income comes from grants from the city of Half Moon Bay and from San Mateo County. The city and county get the money from cable franchise fees and pass it on to MCTV.  Coastsiders pay the franchise fee as a separate line item on their Comcast bills. But it’s not earmarked for MCTV. The city and county could choose to keep the money, or give it to someone else. With the City Council and Board of Supervisors providing three-quarters of MCTV’s revenue, MCTV’s existence depends on keeping them happy.

MCTV’s only other significant source of revenue is what they call "government grants". This appears to be the fees that local boards pay MCTV for taping and cablecasting their meetings. But it’s unclear why MCTV is unwilling to run tapes of meetings they didn’t produce, since the income from taping doesn’t appear to be much more than the expense of volunteers, staff time, and materials. Running these tapes might free up staff time and equipment for something more interesting.

What MCTV calls "direct public support" appears to be what you and I would call advertising revenue.  And MCTV made about $4,000 on advertising in fiscal 2005.

Most startling is that less than 1% of MCTV’s revenue comes from membership dues. If MCTV had to go to the community every year meet its budget, the way that KQED must for example, you could expect them to be a lot more responsive.

If the board of MCTV were elected by the members, as it is at KQED, you could expect them to listen.

[CORRECTION: MCTV’s board is elected by its members.]