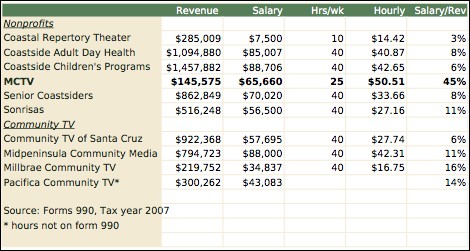 MCTV says, "The Station Manager ... is not compensated for all of that extra time, and is paid substantially less than other access station managers, a fact which MCTV documented for the Grand Jury, but which the Grand Jury did not see fit to mention in its report." We found that MCTV's Station Manager is paid more than the executive directors of much larger Coastside nonprofits and county PEG stations who work harder, keep regular office hours, manage staffs, and deal with life and death issues daily.

I was heartened to see an independent investigative body, the county’s Civil Grand Jury, investigate MCTV. In the end, the Grand Jury recognized many of the same issues I have noted with the station.

I don’t want to replay the entire Grand Jury hearing in letters to the Supervisors, but I must correct multiple mischaracterizations of the facts and my own position by MCTV in its recent response.

Let me start by saying I have been a long-time supporter of MCTV. I extensively covered the station’s 20th anniversary celebration on my website, Coastsider; I initiated and helped the station write a grant application to make it possible to deliver their recordings of public meetings on the Web; and I strongly supported using Coastside franchise fees to fund MCTV to the Supervisors in 2006.

MCTV says, "The [Grand Jury] Report is in error when it states that MCTV reserves the right to restrict the use of public meeting programming."

MCTV continues to assert that it holds the copyright to these recordings, and therefore "reserves the right to restrict the use of public meeting programming". The station charges the public $50 per meeting for copies and does not permit contracting agencies to provide copies to the public.

I only became a critic of the station when it repeatedly refused to allow permission to reuse newsworthy clips from publicly-financed recordings of public agency meetings. I maintain that these recordings are (1) works for hire that are the property of the agencies that contracted MCTV to create them, and (2) an important part of the public record that cannot be kept from the public sphere through the use of copyright and copying fees.

Despite more than a year of appeals on my part, MCTV only instituted its (relatively) open licensing policy less than a week after I announced that I was running a slate for the station’s board of directors.

I invite you to do the math.

This is why I believe that it is critical that the station’s board stand for election before a membership that owns the station. It is the only way to ensure that the station will respond to the community’s needs.

MCTV says, "MCTV is not in a position to fund or staff a statistically valid survey". An open election is the only community survey that MCTV needs to conduct.

Why doesn’t MCTV want an independent board?

MCTV says, "The Bylaws amendment recently passed overwhelmingly by over two-thirds of the MCTV membership was actually a vote of confidence in MCTV’s management, and a frank repudiation of the small group of individuals who have criticized MCTV and sought to substitute their judgment for that of MCTV and its Board."

Because MCTV had a very thin membership (about 100 members in a community of 30,000), station management was able to control who sat its board of directors. I offered to help the station with a membership drive in 2007, but was rebuffed by the board. It’s not surprising that this captive membership was willing to dissolve itself at the board’s request.

Ours was the first non-board-nominated slate for the MCTV board in recent memory, perhaps ever.

In response to our challenge, MCTV distributed ballots to its members so quickly that it did not have time to include the required candidates’ statements. There can be only one reason for this: to prevent our supporters from joining the station and voting in the board election. I have attached a protest letter and timeline of the election process that was sent to the station and Supervisor Rich Gordon last year [pdf].

MCTV describes us as "small group of individuals who have criticized MCTV and sought to substitute their judgment for that of MCTV and its Board". If we were so small, why was MCTV afraid of an open membership drive and election? And, of course, "substitution of judgment" is the very purpose of holding elections.

We only ran after a year of stonewalling by the station and its board. Despite the fact that we would not have held a majority of seats on the MCTV board, the station decided that the time for an elected board had ended after 25 years of service. MCTV currently has a resident of Pacifica, outside the station’s service area, and its Station Manager’s spouse on its board.  Why can’t they find enough independent Coastsiders to serve on their board?

MCTV’s behavior demonstrates why its board should stand for election.

The evidence suggests that MCTV is content to subsist on tax dollars from the city and county and unwilling to raise money in the community with memberships and other fundraisers because it does not want to answer to a board elected by a broad membership base drawn from the community.

If the station had a representative membership base which elected its board of directors, it would have a local funding base, could use its member rolls as a source of additional donations, and would be more responsive to the community it is chartered to serve.

MCTV says, "In order to live within its budget, MCTV can no longer keep open office hours because we cannot afford a secretary."  But it employs a Station Manager for at least 25 hours a week. MCTV does not explain why its Station Manager cannot staff the office. Is there another nonprofit or PEG station in San Mateo County whose executive does not keep regular office hours?

MCTV says, "The Station Manager ... is not compensated for all of that extra time, and is paid substantially less than other access station managers, a fact which MCTV documented for the Grand Jury, but which the Grand Jury did not see fit to mention in its report." I have attached a salary study that shows MCTV’s part-time Station Manager is paid more than the full-time executives of comparable Coastside non-profits or PEG stations in San Mateo County. Many of these executives manage large staffs and deal daily with life or death issues. All keep regular office hours and all certainly work more than forty hours per week.

There is a model for reforming MCTV

Pacifica—a community of about the same size—has a creative, lively station. Pacifica Community TV has a broad membership base and raises its money from the community. It encourages community members to create their own programming. Its offices are open to the public Monday through Friday from 1 to 6pm. Its board is elected by the its members and it televises its own board meetings.

I believe that MCTV’s management is unresponsive to the public and its programming is lackluster because it isn’t engaged with its community. It gets its funding from agencies which have more important things to do than micromanage a small PEG station in a small town on the Coastside. It has been years since the station had to answer to its members.

But the community is capable of managing its own station if it is given the opportunity.

I request that the Supervisors and city of Half Moon Bay insist that any organization they charter to provide PEG services on the Coastside be a membership organization with an elected board of directors, and that it raise a substantial share of its funding directly from the community it serves. I also recommend than the chartered PEG operator be required to have an unpaid independent ombudsman whose job it is to assure responsiveness to the community.