A Documentary about Berlioz and the Symphonie Fantastique

The next Coastside Film Society screening focuses on the life and music of  the great French romantic composer Hector Berlioz.  In this fascinating behind-the-scenes documentary, conductor Michael Tilson Thomas and the San Francisco Symphony take viewers on a guided tour of the life and music of this great, but troubled composer. 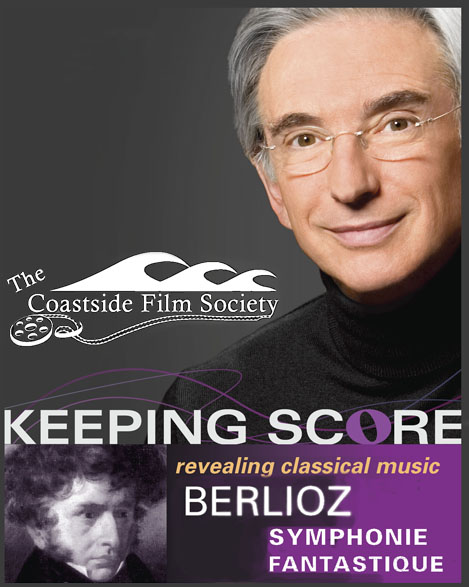 Terry Teachout of The Wall Street Journal raves, “[The Keeping Score documentaries] are, hands down, the best classical-music programs of their kind since Leonard Bernsteins Young Peoples Concerts. [Michael Tilson Thomas] is the finest American conductor of his generation, and the only one who learned the lessons of Leonard Bernstein, using them to turn the San Francisco Symphony into the most adventurous, audience-friendly orchestra in America.”

The film begins by telling the story of Berlioz and Harriet Smithson, the woman who inadvertently served as his muse.  Berlioz got his first glimpse of Smithson in 1827 when he attended a performance of Hamlet with Smithson starring as Ophelia.  Berlioz was instantly smitten and began writing her love letters, none of which were ever answered.  In his despair, he began working out his feelings by composing a romantic symphony about an artist who was so tormented by an unrequited love affair that he begins a drug induced downward spiral .

The first performance of Symphonie Fantastique caused a huge uproar.  We get to hear the work in its entirety in the second half of the documentary as performed by the wonderful San Francisco Symphony under the lead of Tilson Thomas.  Of course a modern audience will not be as shocked to hear a work that is so obviously autobiographical as they were in 1830, but scholars still argue about Berlioz’s place in the musical firmament. Was Berlioz just another romantic wearing his heart too obviously on his sleeve, or was he an early example of a drug addled musician willing to do anything to get the girl?  Come to the screening and let us hear what you think.