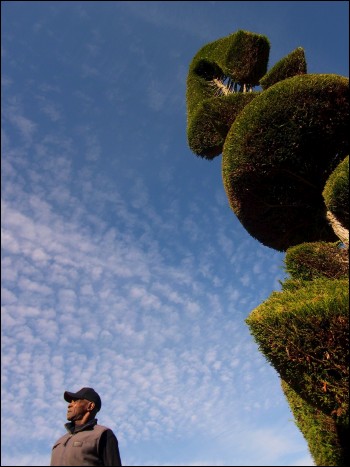 On Saturday March 21, The Visionary Edge will host a screening of A Man Named Pearl at the Johnson House Train Depot in Half Moon Bay.     A Man Named Pearl tells the inspiring story of self-taught topiary artist Pearl Fryar, whose unlikely journey to national prominence began with a bigoted remark.

In 1976, Pearl took a job in a can factory in Bishopville, South Carolina. New to this rural southern town, he and his wife Metra looked at a house for sale in an all-white neighborhood. The Fryars’ real estate agent was notified by neighbors in the prospective neighborhood that a black family was not welcome.  A homeowner voiced the collective concern: "Black people don’t keep up their yards."

Assembled without frills or fuss, A Man Named Pearl is as much a portrait of a small Southern town as of an unassuming black folk artist. Aided by Fred Story’s jazzy score, the directors, Scott Galloway and Brent Pierson, keep things moving with appreciative comments from the financial and spiritual beneficiaries of Mr. Fryar’s talents (and from the female admirers who find his lithe, 68-year-old body every bit as interesting as his foliage). Those white families who, decades ago, rejected him as a neighbor because "black people don’t keep up their yards" must be weeping into their seed catalogs."

Saturday, March 21st.  Doors will open at 7:00 pm, film begins at 7:30.  The Johnson House Train Depot, 110 Higgins Purisima, HMB.  The film is free, however donations are encouraged to cover screening costs. Call 650-560-0200 for information and reservations as seating is limited.   Located in Half Moon Bay, The Visionary Edge produces events to inform and inspire us all to create a wiser, sustainable and more compassionate world.

Pearl was stung by the racial stereotype. But rather than become angry and embittered, it motivated him to prove that misguided man wrong. Pearl bought a house in a "black" neighborhood and began fashioning a garden that would attract positive attention. His goal was modest, but clear: to become the first African-American to win Bishopville’s "Yard of the Month" award.

Realizing he would have to do something spectacular to impress the Bishopville garden club, Pearl began cutting every bush and tree in his yard into unusual, abstract shapes. He didn’t know it then, but he was creating a magical wonderland that would, in time, not only garner local recognition, but also draw thousands of visitors from across the United States and around the world.

Now 68, Pearl has been featured in dozens of magazines and newspapers, including The New York Times, as well as several television programs such as CBS Sunday Morning. The media interest that Pearl and his topiary garden generates helps steer much-needed tourist dollars into the declining town of Bishopville and Lee County, the poorest county in the state of South Carolina.

But the impact that Pearl and his art have had on his community is not just economic. He’s also had a profound spiritual influence. As Pearl’s minister, Rev. Jerome McCray, says of the garden: "It’s the one place in all of South Carolina that people can go, both black and white, and feel love."    Visitors who wander Pearl’s three-and-a-half-acre property quickly recognize that love is the garden’s central theme. Meticulously etched into the ground in huge, flower-filled letters are three words: LOVE, PEACE & GOODWILL. These are the guiding principles by which Pearl lives his life and how he’s been "keeping up his yard" for nearly thirty years.

A Man Named Pearl is a subtle and intriguing film that opens both hearts and minds. It offers an upbeat message that speaks to respect for both self and others, and shows what one person can achieve when he allows himself to share the full expression of his humanity. As Pearl says "There’s always gonna be obstacles.  The thing is, you don’t let those obstacles determine where you go."

According to Jeannette Catsoulis of the New York Times, "With no training other than a three-minute demonstration from a local hardware store, Mr. Fryar rescued discarded plants from the town nursery and painstakingly molded them into mind-boggling configurations. Neighbors doubted his sanity and nicknamed him Edward Scissorhands, but this modest and supremely patient son of a sharecropper persisted with his fantastical sculptures. Nowadays his work draws thousands of visitors a year and he even has a day named after him: quite a step up from his original goal to win Yard of the Month.


"A Man Named Pearl tells the inspiring story of self-taught topiary artist Pearl Fryar. It is a subtle and intriguing film that is certain to open hearts and minds. It offers an upbeat message that speaks to respect for both self and others, and shows what one person can achieve when he allows himself to share the full expression of his humanity."
rottentomatoes.com

"If this documentary can claim an ethos, it may be that of the small, sleepy
Southern town where everybody knows everybody, one good deed can blossom into many, and one story of hope can inspire a generation."
Ronnie Scheib, variety.com

"If ever there were a great story about going green and recycling, making something out of nothing, it is this film . . . A Man Named Pearl is a small gem of a movie that should not, particularly in these dark economic times, be missed."
BlogCritics.org

"What began as a kind of backyard hobby has taken on international significance. The film is as unassuming and charming—and inspirational—as Pearl Fryar himself. It is about possibilities, and how we’re only hemmed in by the limits we set for ourselves. Go spend 77 minutes with Pearl Fryar and his garden. You’ll feel better for it."
Ken Hanke, Mountainx.com

"Self-taught topiary artist Pearl Fryar could go mano-y-mano with Edward Scissorhands in a battle to create the most fanciful garden ever and come out the undisputed winner."
Chris Haire, CharlestonCityPaper.com