A story of two kids and their love of great movies

This month the Coastside Film Society is screening a Chinese movie about the power of movies to give direction to our lives.

In the first scene, a troubled young woman named Ling Ling attacks a bicycle delivery boy named Mao in modern Beijing. Friendless and heading to jail, Ling Ling asks Mao to take her apartment key and feed her fish. He agrees, and his simple life is uprooted forever. 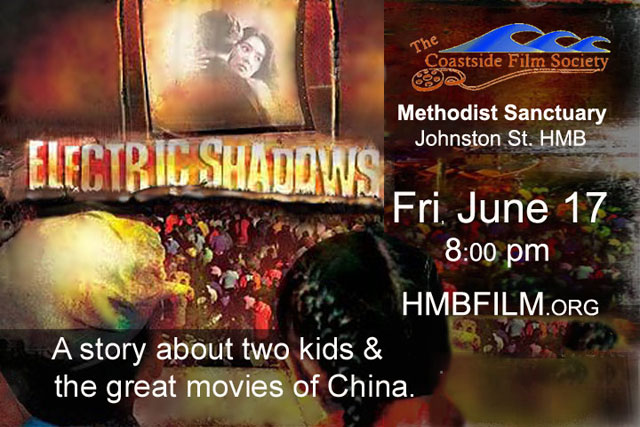 Stefan S, of Nutshell Reviews raved "Electric Shadows balances drama, comedy & tragedy with great aplomb... It's been a long time since I was so immensely moved by a single film...With amazing cinematography and locales, and a wonderful score performed by the China Philharmonic Orchestra, this is a must watch. "

When he arrives at the apartment Mao quickly discovers that this mysterious girl is just as big a film buff as he is. Not only is the place stuffed full of film memorabilia, her diary describes important events in her life as scenes pulled from favorite old Chinese movies. Reading these scenes transports Mao back to his childhood during the Cultural Revolution of the early 1970s.

Slowly it dawns upon Mao that this mysterious girl is a beloved  childhood friend -- the one who taught him to love movies. But there was so much about her life that he never understood at the time.

In Electric Shadows " politics form a distant backdrop to the family drama and to the story of Mao and Ling Ling's separation and reunion. In its loveliest moments, the movie transcends its story to evoke the world experienced by two children who are so close they are able to share the same enchanted fantasy." Stephen Holden, New York Times

Professor Jenny Lau of the Film School at San Francisco State will handle introductions and handle the post screening discussion.