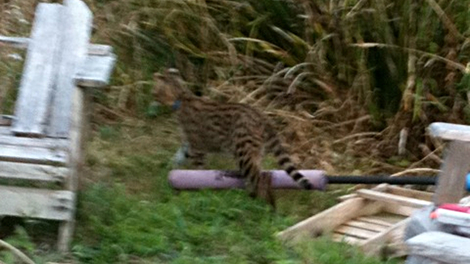 In the past month my housecat has been severely sliced up twice.  I wondered if a bobcat and he now had overlapping territories.  Then yesterday afternoon I found this hybrid cat, (I believe it is a Savannah cat which is a hybrid between a Serval and a housecat) just outside my front door.

The cat has a blue collar with a bell attached.  No normal cat could stand a chance against him.  Triple check your chicken enclosures and do not leave windows open.  I read in Coastsider someone in Montara is setting out an animal trap.  This might very well be to catch this animal.  He was seen on Date Street (cross is Edison) at 7:40 pm August 22, 2010.

I had previously heard of these cats because one has come inside neighbors homes and killed quite a few caged pets in El Granada.  Apparently they are a legal pet.  Margot Lowry