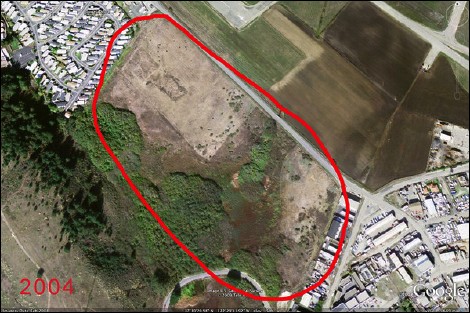 No agriculture, but indications of past cultivation, at Big Wave as late as 2004

Over at Montara Fog, Darin Boville has a the site’s "historical" use for agriculture was used as a pretext for dumping truckloads of fill on the site without a permit.

According to local residents, in the 1980’s a former owner of the Big Wave property, J.L. Johnson, also had plans for a commercial development on the site. He took to farming in an apparent effort to eliminate environmental concerns. In 1988 he sued San Mateo County and won a ruling stating that "routine agricultural activity" on the property was exempt from both Coastal District Regulations and County Grading Regulations. Johnson farmed for a year or two before letting the land fall fallow.

Later Johnson was jailed after defrauding investors in his development projects on the coast.

After Jeff Peck and Steve Barber purchased the property they too proposed a large commercial project (Big Wave) and commenced farming the lots and reaping controversy. Neither owner is a farmer in his own right. Local farmers are hired to farm on the property.

The attorney who worked for J.L. Johnson, Mike McCracken, is also on the Big Wave leadership team.

This is a must-read and an excellent use of historical research to make a case.