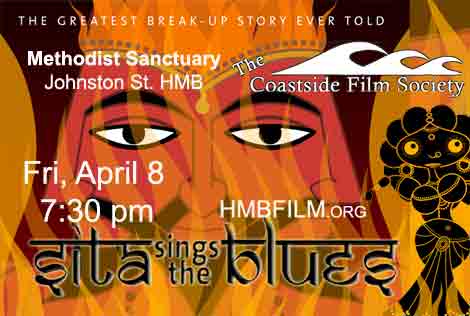 Nina Paley is an amazing animator, syndicated comic strip artist, a professor at Parsons School of Design, and a Guggenheim Fellow who creates masterworks all by herself.  She “is half revelation, half revolution. A Western woman who took an Eastern story and with a personal computer single-handedly animated a full-length film that received accolades from Roger Ebert and attacks from conservative Hindus, a story that morphed into a protracted fight with Sony and others about copyrights, catapulting the artist into an Internet hero and her struggle into a cause celebre for Creative Commons.” Lavina Melwani, Hinduism Today

A man plays fetch with his dog. The game is complicated by the fact that the world they occupy is chock full of optical illusions.

Nina Paley juxtaposes the story of Sita and husband King Rama from the Hindu epic the Ramayana of Valmiki with her own Indian divorce creating “the greatest break-up story ever told”. The movie utilizes a different style of animation for each type of scene:  Irreverent Indonesian shadow puppets provide narration. A curvaceous Betty Boop-like Sita takes center stage when she sings the blues.  Battle scenes are rendered either in a style reminiscent of the Yellow submarine (kids will love this) or as Mughal drawings from ancient Hindu texts. Paley’s own life is rendered as fuzzy cartoon squiggles.  The musical score jumps back and forth between traditional Indian instrumentals to the smoky vocals of 1920’s jazz phenom Annette Hanshaw used to give Sita voice when she feels blue.

Sounds confusing?  Roger Ebert of the Chicago-Sun Times freely admits he was put off when he first read the description of the film and had to be talked into watching it.  When he did he was blown away. “I put on the DVD and start watching. I am enchanted. I am swept away. I am smiling from one end of the film to the other. It is astonishingly original. It brings together four entirely separate elements and combines them into a great whimsical chord. ... To get any film made is a miracle. To conceive of a film like this is a greater miracle.”

Don’t make the mistake Roger almost did. Come see this miracle when the Coastside Film Society screens it!  It boasts battle scenes that put modern anime to shame, a mixed Indian and classical American Jazz soundtrack that will thrill, two heartbreaking tales of love gone wrong, artistic flourishes that will amaze, enough humor keep both young and old amused, and opening credits that will blow you away.

“Ms. Paley did everything in this an amazingly eclectic, tour de force by herself. The ingenuity is dazzling—and a lot of fun.” A. O. SCOTT New York Times

More info and a trailer at : www.HMBFilm.org