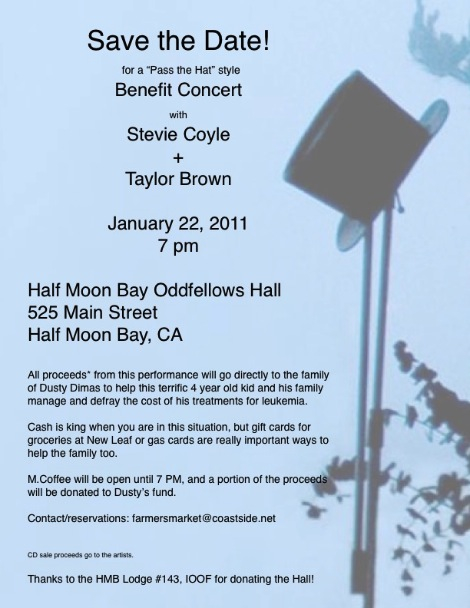 The Coastsider Farmers’ Markets and The Half Moon Bay Oddfellows Lodge #143 are honored to present two outstanding musicians,  Mr Stevie Coyle, along with Taylor Brown in a benefit concert on Saturday, January 22 at 7pm at the Oddfellows Hall in Half Moon Bay.  All proceeds from the performance go to the family of Dusty Dimas to help defray the cost of the spectacularly expensive but so far effective treatments for leukemia for this 4 year old Coastsider.

This will be a “Pass the Hat” affair, in keeping with the traditions of small communities coming together to help one another in times of celebration or distress, contributing what they can to assist their neighbors.  A Top Hat will be passed between sets, and guests contribute what they can.  GIft cards to New Leaf or gas cards are also really valuable ways to help the family.

Colleen Granahan, Dusty’s aunt and the assistant manager of the Coastside Farmers’ Market in Pacifica, is conducting a Blood Drive at the Skate Park on Kelly Avenue that afternoon as well.

The historic Oddfellows Lodge is located upstairs at 712 Main Street, Half Moon Bay.  To reserve a spot, drop a note indicating the number of guests to [email protected]

Taylor Brown is a versatile guitarist / vocalist with strong roots in Blues, Folk and Classical music. From 2003-2006 Brown toured with folk musician Kate Taylor (sister of James Taylor), while earning a degree in Classical Guitar performance from Vassar College. Since relocating to California in 2007, Brown has charmed the wine country with his ability to weave a performance of classical romantic guitar, unique arrangements of jazz/blues classics and popular songs. His original material has been compared to singer/songwriters such as Paul Simon, Nick Drake and Joni Mitchell. Brown has performed with Kate Taylor and as a solo artist all over the country. Some performance highlights include Carnegie Hall (NY), The Cat’s Cradle (NC), Nectar’s (MA) and The French Laundry (CA) Among others, he has appeared with Livingston Taylor, Dar Williams, Levon Helm, Tom Rush and Carly Simon.

Stevie Coyle is one lucky bum. David Lindley gave Stevie his very first lessons. He obtained degrees in Theatre and Theology at Santa Clara University, after which he joined The Royal Lichtenstein Circus, then pulled a lengthy stint as actor and stage manager for The San Jose Repertory Company. Stevie appeared on Cheers and had a regular role on The Young And The Restless. In 1999 he co-founded and fronted The Waybacks and toured steadily with them from 2001 through 2007. The band released 4 albums in that time, played major festivals like Merlefest, Grey Fox, Floydfest, Great Waters, Old Settlers, Bumbershoot and Hardly Strictly Bluegrass, toured Australia and collaborated with Lloyd Maines, Michelle Shocked and Bob Weir of The Grateful Dead.