Beyond Our Differences, Saturday 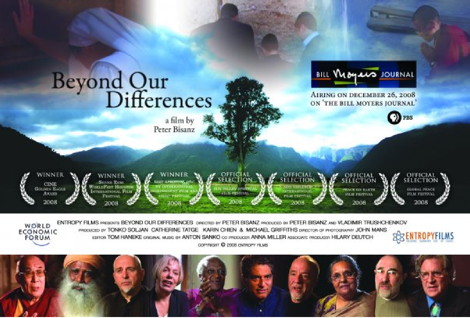 On Saturday, October 23, The Visionary Edge will present Beyond Our Differences, a thought-provoking film that aired on Bill Moyer’s Journal.  It examines one of the most profound and relevant subjects of our day - that of faith in the modern world.

What are the fundamental issues facing our world today?

Where do world leaders and the biggest thinkers of our time in politics, religion, culture, arts and science weigh in on these issues?

How do these leaders apply their own experiences with faith and morality when forming constructive solutions for the world’s most distressing and calamitous problems?

In what context do faith and religion play principal roles in inspiring our collective peoples toward a more peaceful and compassionate humanity?

These are the critical questions that Beyond Our Differences strives to answer.

With large, complex problems facing the world today — war, poverty, weapons, environmental degradation, starvation, overpopulation and severe desperation among millions — people are longing for meaning. Many find answers in religion or spirituality, but as a result, faith and religion are often hijacked by those seeking to enhance their own power at the expense of others, often all in the name of God.

Saturday October 23rd at Community United Methodist Church, 777 Miramontes Street (at Johnston), Half Moon Bay. Suggested donation for the film portion of the evening is $12 advance, $16 door. No one will be turned away for lack of funds. Call 650-207-3440 for information and tickets.

Differences.  A tapestry of distinct voices and viewpoints regarding spirituality, the film is woven with one universal expression of hope, and a purpose of empowering viewers, through their own expressions of faith, to impact positive change in their lives and the lives of others

Director Peter Bisanz stated “In disseminating this message of unity and hope our method has been to interview high profile people of faith, whose words might then be interspersed with the extraordinary experiences of lay people to illuminate the rich variety of religious experience in our world.”

"Beyond Our Differences is a thought-provoking film that examines one of the most profound and relevant subjects of our day - that of faith in the modern world. Indeed, the call for peace, tolerance and mutual good will is shared by all our diverse traditions. I congratulate the filmmaker on this visually magnificent work, one that truly inspires change on a global level." stated Klaus Schwab of the World Economic Forum.