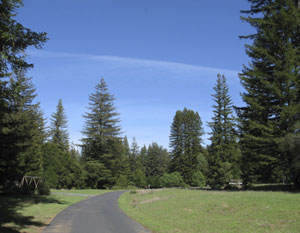 The California Department of Parks and Recreation has agreed to accept the 535-acre Little Basin property to add to adjacent Big Basin Redwoods State Park. A priority State Parks acquisition, Little Basin was appraised for $7.7 million in 2010 and will now be sold to State Parks for $6.5 million, as of close of transfer expected by the end of this month.

In transferring Little Basin to State Parks, Peninsula Open Space Trust (POST) and Sempervirens Fund have set aside $1.3 million from the sale proceeds in a land stewardship fund to ensure that Little Basin is well maintained and cared for into the future. The two nonprofit land trusts have jointly owned and managed Little Basin since 2007, when they acquired the property in the heart of the Santa Cruz Mountains for $4 million from the Hewlett-Packard Company (HP).

Little Basin includes open meadows and redwood forests, hiking trails, and a variety of group camping sites. It also has a commercial kitchen, play room, restrooms and showers, baseball field, and a basketball court. HP had owned and managed the land as a private outdoor recreation and corporate retreat site for its employees since 1963. When the time came for HP to sell Little Basin, they sought out POST and Sempervirens in the hope that the property’s scenic beauty and impressive recreation infrastructure could one day be permanently protected and opened to the public.

“We knew Little Basin is an incredible natural and recreational resource that would be ideal as public parkland,” said POST President Audrey Rust. “With the transfer of Little Basin to State Parks, our original goals of resource protection and public access are accomplished.”

Along with this property transfer, Sempervirens and POST are also transferring a concession agreement they have established with United Camps Conferences and Retreats (UCCR) to State Parks to run Little Basin until 2017. UCCR is a nonprofit organization based in Petaluma that specializes in running outdoor camping facilities and environmental education programs. The agreement with UCCR will be buttressed by the $1.3 million land stewardship fund to ensure that Little Basin is well cared for into the future. Sempervirens and POST plan to use the stewardship fund to upgrade the facilities before and after Little Basin is reopened this spring for group camping.

“We went through a detailed, competitive process to find UCCR and know they will do a fantastic job running and maintaining Little Basin as one of the state’s premiere environmental schools and group camping facilities,” said Sempervirens Fund Executive Director Reed Holderman. “UCCR has more than 40 years of experience running outdoor nature camps in Northern California and is the perfect operator for this facility.”

“The Governor’s budget proposal has sent a clear message that we must find new ways to maintain key additions to our State Park system,” said Ruth Coleman, director of the California Department of Parks and Recreation. “Our partnership with POST and Sempervirens has allowed us to expand one of our flagship parks and address increasing demand for recreational services without significantly impacting our limited resources for park maintenance statewide.”

$6.5 million for a developed parcel that will require expensive ongoing maintenance beyond what POST will cover from a state parks agency faced with closing many dozens of existing parks due to the current budget crisis? Where will the money come from? Certainly not the overdrawn general fund. From bonds? That is still a huge financial drain on government beyond the purchase price due to the interest on bonds over the years.

Due to irresponsible (or naive?) borrowing (often approved by the state’s hypocritical tax-hating voters in the case of parks and rec bonds), debt service is a huge load on government in California. And how many parks and rec staff jobs could be saved and parks kept open for the public with the state money being spent on property acquisition and unnecessary park facilities development? Either these state parks people have a huge, secret money tree somewhere, or they are spending recklessly with no regard to long-term realities.