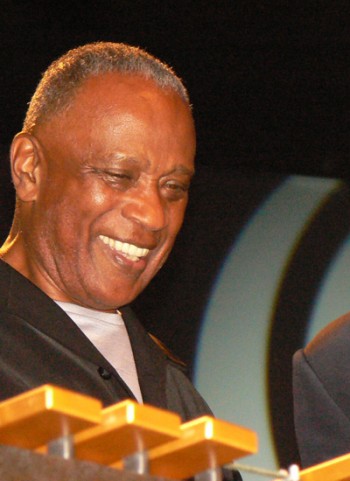 While many jazz cats choose to stay close to the genre’s capital, New York City, this 68-year-old legendary vibraphonist prefers his rural one-acre lot in Montara, the anti-New York — a quiet town of about 3,000 residents located on the coast of San Mateo County, roughly equidistant from Half Moon Bay and Pacifica.

He bought his home in 1972 for $39,000, using money earned from the hit
single "Ummh," and he has never found reason to leave. Indeed, Montara has become a fortress of solitude for this super jazz man and his wife, Rosemary, one that offers a refreshing country counterpart to the busy lifestyle that comes from being a professional touring musician.

"Most musicians, at least most jazz musicians, won’t be found splitting wood in the backyard," Hutcherson jokes. "People ask me, ‘Do you go to a lot of jam sessions?’ I say, ‘No.’ They ask, ‘Well, what do you do?’ I say, ‘Well, Rosemary and I do a lot of gardening.’" ...

Hutcherson returned to California in the late ‘60s, settling first in San Francisco’s wild Haight-Ashbury neighborhood. During that time, he recorded one of his best-loved albums, 1970’s "San Francisco," which produced the hit single "Ummh" and provided him with the capital to buy his current home.

In Montara, Bobby and Rosemary raised three sons — Teddy, Barry and Jasiri, all of whom still live nearby. Hutcherson continued to work on what’s become one of the most satisfying catalogs in jazz. Many album titles were clearly inspired by his life on the San Mateo County coast — 1978’s "Highway One," 1999’s "Skyline" (a possible reference to Route 35, generally known as "Skyline Boulevard") and, most certainly, 1975’s "Montara."

I’ve owned a couple of Bobby Hutcherson albums since I first started to listen to jazz in the eighties. But I first met him at a Board of Supervisors meeting where he was speaking on proposed revisions to the Midcoast’s Local Coastal Program.