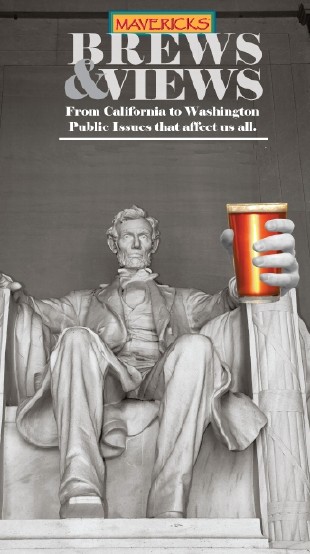 Brews & Views at the Half Moon Bay Brewing Company takes up California Politics – The Real Story. Who better to discuss the inside story than the Former President pro Tem, California State Senate: Dan Perata. Don’s public service began as a teacher and he eventually became one of the most powerful elected officials in the State of California?

The event will take place Thursday, February 4, from 6 to 8pm at the Half Moon Bay Brewing Company.  The Brewing Company will contribute 10% of your dinner on the first Thursday of every month to a local charity.  Come for the event, stay for dinner and support the community.

The moderator will be Alex Evans, President and Founder of EMC Research. Alex has been recognized as an expert in California, for all forms of opinion research, focus groups, voter polls, strategic design and development and public policy analysis. The guest commentator will be Half Moon Bay City Mayor Marina Fraser.

Former President pro Tem, California State Senate Don Perata has a distinguished record of civic engagement as a public servant and elected public official, rising from the ranks of school teacher to become president of the California State Senate. A native and life-long resident of the East Bay, Don is the son of immigrant parents who taught him the value of hard work.  As a youngster, he toiled at his father’s side, delivering milk door-to-door, and applied this grassroots approach throughout his career.

Don has garnered a well deserved reputation as an elected public official who is accountable to his constituents – and gets things done. He served two terms as a member of the Alameda County Board of Supervisors (1986-1994), where he championed the causes of the poor, delivery of services through community-based organizations and effective mental health services.  As a Supervisor, Don worked with neighbors to clean-up problem liquor stores, ban cigarette advertising and assure safe streets and neighborhoods. In 1996, the people of Oakland, Piedmont and Alameda selected Don as their representative in the State Assembly.

In Sacramento, he had an immediate impact, taking on the gun lobby and passing an historic assault weapons ban to keep dangerous weapons out of the hands of criminals. In 1998, he was elected to fill an unexpired term in the California State Senate, and over the next decade became one of the most powerful leaders in California.  Selected on three occasions by his colleagues to serve as president pro tem of the Senate, Don proved to be an effective leader who showed how to make government work for people.  His accomplishments include a 2004 Bay Area Regional Transportation Bond Measure and a 2006 Infrastructure Bond to fund schools, clean air and water programs, transportation and transit. Throughout his career, Don Perata has been a fierce advocate for public education, social justice, environmental protection, public safety and effective delivery of government services.  He has mounted a campaign for mayor of Oakland in 2010.

Fixed. Thanks for asking.