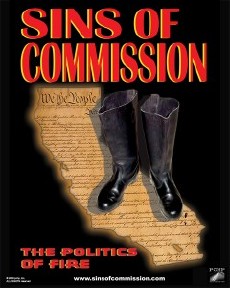 The case that was dismissed is featured in the unreleased documentary "Sins of Commission".

NOTE: This is largely the Coastal Commission’s press release, and is not an objective account.

In a well-known suit by two Malibu property owners’ suit against the California Coastal Commission, a judge has ruled in favor of the commission on all counts [pdf of ruling]. The action by Superior Court Judge Luis Lavin today granted the commission’s request for summary judgment, ruling that the issues raised in the case did not warrant further review. The ruling exonerates the agency, as well as two Commission employees named in the suit.

This is the case that inspired Richard Oshen’s as-yet-unreleased documentary entitled "Sins of Commission."

The case involved illegal roads, grading and tree removal on property owned by Dan Norris and Peggy Gilder. Because the property is located in the coastal zone, these activities required coastal development permit. A site visit in October, 2005, was authorized by a court order. After verifying illegal development on site, the Commission issued a "Notice of Violation" on the property and told the owners to apply for a permit. The owners refused, and sued the Commission. Last year, a superior court upheld the Commission’s action and threw out five of their 8 claims. Today’s action eliminated all remaining claims.

The case has generated controversy, because Gilder’s friend, Richard Oshen, filmed the site visit and used it as the basis for a documentary that is highly critical of the Coastal Commission. When the Commission requested copies of the footage as evidence in the case, Oshen complained that the Commission was trying to censor him.

"We did nothing of the sort," said Commission Chief Counsel Hope Schmeltzer. "His friends asked him to film our site visit, then sued us for trespassing and damages. We just wanted a copy of the footage to defend ourselves in court. He has always been free to use the footage in any way he wants."

Now the Commission won’t have to bother. Lavin’s ruling dismissed every one of the defendants’ claims, including the claim that the Notice of Violation was a "taking" of their private property. The allegation that the site inspection violated their civil rights was found to be "without merit." The judge found the Commission staff’s actions to be "objectively reasonable," and found "no triable issues of material facts."