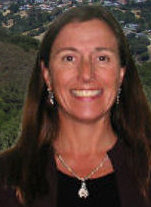 Cecily Harris, from her campaign site.

MROSD has issued a press press release with some details:

Cecily Harris was elected to the Midpeninsula Regional Open Space District’s Board of Directors by voters last night over incumbent Kenneth C. Nitz. Harris earned 59.5 percent of the vote from the constituents in El Granada, Half Moon Bay, Montara, Moss Beach, Redwood City, San Carlos and Woodside. The District’s Board of Directors will adopt a resolution certifying her election at their Dec. 10 meeting. Nitz earned 40.5 percent of the votes. [...]

The District is divided into seven geographic wards each represented by a board member elected to a four-year term. Nitz was elected to represent ward seven on the District’s board in 1996. He completed three consecutive terms, running unopposed in 2000 and 2004.

Harris, a San Carlos resident, became the first opponent to challenge Nitz’s board seat. She is a Financial Services Manager with the San Mateo County Parks Department and served for nine years as a San Carlos Parks and Recreation Commissioner. Issues she is interested in include single and multiple use trails, interpretive programs, and natural resource protection.