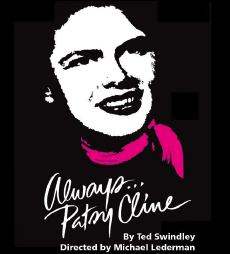 Coastal Repertory Theatre’s Always…Patsy Cline opens this Friday.  This musical play, complete with down home country humor and true emotion, includes many of Patsy’ unforgettable hits such as "Crazy", "I Fall to Pieces", "Sweet Dreams" and "Waking After Midnight"...27 songs in all.
Always…Patsy Cline is more than a tribute to the legendary country singer who died tragically at age 30 in a plane crash in 1963. The show is based on a true story about Cline’s friendship with a fan from Houston named Louise Seger, who befriended the star in a Texas honky-tonk in 1961, and continued a correspondence with Cline until her death.

This show is not to be missed!  Performances run Friday and Saturday night at 8pm and Sunday at 2pm through February 27.  Tickets are selling fast; go to www.coastalrep.com to get yours now!  You can also call the box office at 650.569.3266.  Tickets can be purchased at the box office two hours prior to show time (if available!)


The show is in the final week of rehearsal.  The cast and crew are ready, the band sounds great and the set, constructed from reclaimed barn wood, is gorgeous.  We can’t wait for you to come experience this show!
Coastside’s own Catie Chase stars as Patsy Cline.  Catie has been singing all her life, and is currently in the rock n’ roll band ‘Catie Chase and the Getaways’.  She is a huge Patsy Cline fan and has sung Patsy’s songs for years.  Catie’s look and sound are astonishingly close to those of Ms. Cline.  We can’t describe it, you have to experience it for yourself!
And there is no Always…Patsy Cline, without Louise Seger played by the incomparable Roxane Ashe.  Roxane returns to her southern-roots to play this heartwarming character…it’s a natural, smooth, amazing thing!
Director, Michael Lederman, has brought together an outrageously talented group of musicians to form the Bodacious Bobcats country swing band.  Band members have played with the talents of Elvis Costello, Bob Dylan, Jerry Garcia, Bobby Gentry, Johnny Paycheck, Patty Smith, Jim Stafford, Dwight Yoakam and many more.  And several band members have played Always…Patsy Cline at other venues.