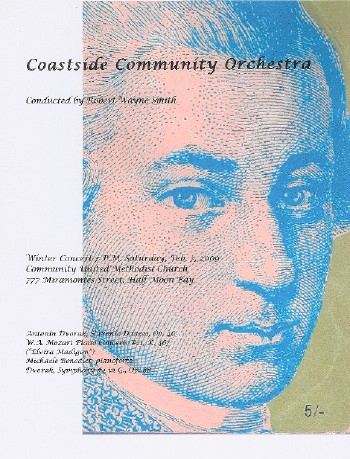 Michaele Benedict has been a member of the Coastside Community Orchestra since its early days, playing piano, harpsichord, organ, keyboards and percussion.  The grand piano at the church is many times larger than the instrument Benedict used in the only other piano concerto she has played with the orchestra, Brian Holmes’ "Concertini for Toy Piano."

Although Mozart’s correspondence seems to indicate that he wrote out cadenzas for this concerto, none has survived. However, cadenzas for the work have been composed by dozens of pianists including Carl Reinecke, Dinu Lipatti, Philip Glass, Daniel Barenboim, Andras Schiff and even Soulima Stravinsky, Igor Stravinsky’s youngest son. Benedict will play her own short cadenzas.

Benedict began piano studies at age seven and played for her local church at 13. As an adult, her primary teacher was pianist/composer Robert Sheldon, with whom she studied in San Francisco for 14 years. They have collaborated on about 40 songs.

Benedict is an emerita of Skyline College, where she taught piano 17 years and was a staff accompanist. She is a member of Music Teachers National Association of Professional Music Teachers with state and national certification. Although she is "mostly retired," from teaching, she still accompanies the 52-year-old Coastside Chorale led by Joan McBride, her "co-mother-in-law" (their children are married).

Benedict is married to principal cellist Charles Calvert and has two grown sons, both of whom were music students of Robert Smith at Cunha Intermediate School and who went on to take music degrees.