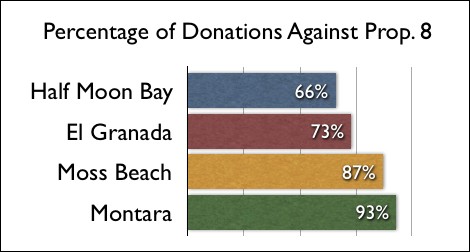 The state has released individual contribution data for supporters and opponents of Proposition 8 [SF Gate database], which put a ban on same-sex marriage in the California constitution.

While all Coastside communities contributed more against than for the proposition, they repeated the typical pattern of increasing progressivism the further north you go.

You can download a spreadsheet of all Coastside contributors and their amounts from Coastsider.