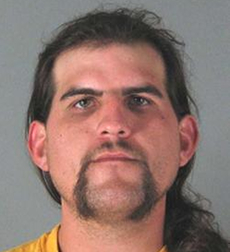 The Examiner says that the Sheriff may have arrested a tagger responsible for nearly a dozen incidents in the past three months in El Granada and Moss Beach.

Zach Ayers, 28, of Moss Beach, was busted Sunday after surveillance video allegedly caught him tagging a truck, according to the San Mateo County Sheriff’s Office.