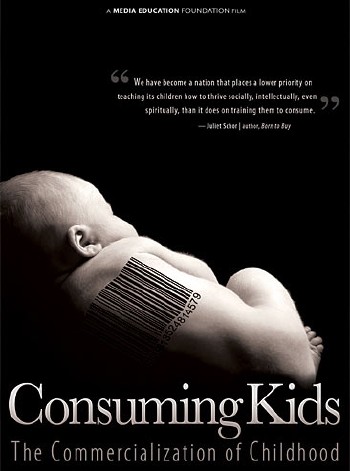 On Saturday June 20th, The Visionary Edge will screen the 67 minute documentary Consuming Kids: The Commercialization of Childhood, directed by Adriana Barbero and Jeremy Earp. The event will be co-hosted by and presented at the Community United Methodist Church in Half Moon Bay.

Consuming Kids throws desperately needed light on the practices of a relentless multi-billion dollar marketing machine that now sells kids and their parents everything from junk food and violent video games to bogus educational products and the family car. Drawing on the insights of health care professionals, children’s advocates, and industry insiders, the film focuses on the explosive growth of child marketing in the wake of deregulation, showing how youth marketers have used the latest advances in psychology, anthropology, and neuroscience to transform American children into one of the most powerful and profitable consumer demographics in the world. Consuming Kids pushes back against the wholesale commercialization of childhood, raising urgent questions about the ethics of children’s marketing and its impact on the health and well-being of kids.

Dr. Susan Linn, prominently featured in the film,  is the author of The Case for Make Believe: Saving Play in a Commercialized World, as well as Consuming Kids: The Hostile Takeover of Childhood  upon which the documentary is based.  She states "Three decades ago corporations spent $100 million marketing to children. Now? We’re at $17 BILLION." Linn, is co-founder and director of The Campaign for a Commercial-Free Childhood and a psychologist at Judge Baker Children’s Center and Harvard Medical School.

In 1980, Congress passed legislation removing all limits not only on what was sold to children but how it was sold. If corrupting children’s values were not enough, their health is also being compromised. In the absence of any regulation of food products sold to children, they are bombarded with ads that celebrate cereals and snack foods high in fat, salt, and sugar.  Neither children or parents are prepared or able, to defend themselves against a juggernaut of advertising that exploits knowledge of child development for the purpose of selling goods.

"It’s NOT a Darth Vader vs. Luke Skywalker saber war…there are AMAZINGLY POSITIVE things that can and should be leveraged with the power of media and marketing," states Amy Jussel, founder & Executive Director of Shaping Youth. To me it’s all about accountability and responsibility to do no harm…Yet industry has an ABYSMAL record in that department with kids by putting profiteering over public health, eroding the emotional and physical well-being of children."

According to Dr. David Elkin "Deregulation, which ignores the role of greed in human affairs, has created the current economic crises. The greed on Wall Street has done extraordinary damage to our own financial institutions, and to those of other countries. Yet the damage done by the greed of Wall Street cannot compare to the damage being done to our children by the greed of Madison Avenue. Economic downturns can eventually be corrected, but the damage done to our children may be irreversible. That is why Consuming Kids is such an important film and why it should receive wide distribution."

"Our children’s minds are at stake, their bodies are at risk, their emotional health is at an all time low, and their values are up for grabs.  How do we take back control from corporations who are willing to sacrifice our children in return for a profit?  It’s a very important film and I invite everyone to come," says Reba Vanderpool of The Visionary Edge.

Saturday, June 20th. Doors will open at 7:00pm, event begins at 7:30 at the Community United Methodist Church, 777 Miramontes Street (at Johnston), HMB. The event is open and free to the community. Call 650-560-0200 for information and reservations.