Could a strategic retreat have saved SF’s Great Highway—and its beach? 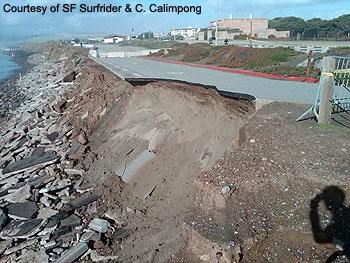 In 2003, San Francisco’s Ocean Beach Task Force recommended several proposed long-term solutions to erosion at Ocean Beach. One option was a strategic retreat from the coastline, moving a nearby sewage tunnel and the highway inland, reports the Examiner.

Now, the city may have to shore up the bluff with a rock wall that will likely only compound its problems.

In recent weeks, the bluffs along Great Highway south of Sloat Boulevard have yielded to powerful waves stirred up by this year’s El Niño weather system in the Pacific Ocean. In the most-extreme areas, the bluffs have retreated more than 70 feet from where they were in a 2007 assessment. In one area, the guardrail of Great Highway has crumbled off the road.

Worse, the waves are now within 20 feet of a mammoth sewage tunnel that lies deep under Great Highway, Department of Public Works project manager Frank Filice said. He said if left untended, and if waves through the rest of winter are anything like they were the past few weeks, that 14-foot-wide tunnel could be breached, spilling as much as 10 million gallons of raw sewage onto the beach. [...]

But advocate Dean LaTourrette, director of coastal advocate organization Save the Waves, said the rock wall could cause further erosion in the long run, and the bad erosion now being seen could partly be caused by the rock walls installed in the 1990s just to the north. The walls also can create a safety hazard and impact wildlife habitat, he said.

The Chron says the Army Corp of Engineers had a plan also:

In 1994, storms erased 30 to 40 feet of the coastline in the same area south of Sloat. A 1996 report from the Army Corps of Engineers recommended building a permanent seawall in the area.