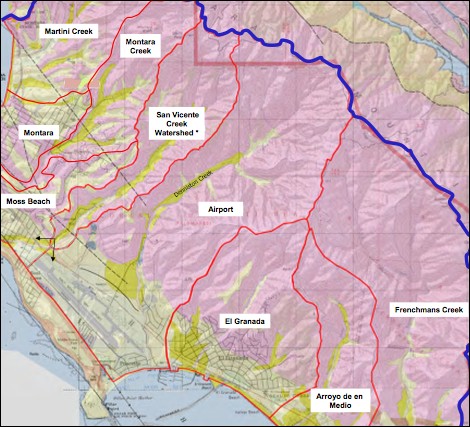 The Midcoast Groundwater Study contains lots of interesting charts of the geology and hydrology of the Midcoast.

San Mateo county has released a long-anticipated Midcoast groundwater study. The study provides a great deal of useful information about the sustainability of the Midcoast’s water supply in the face of current and planned future demand.

There is a 60-day review and comment period for this report that will end at 5pm on June 22.  Comments should be directed to:

You can download the full report and the executive summary from Coastsider.  Both documents are worth downloading. The main report contains a great deal of detail about the sustainability of water in each of nine Midcoast regions, and detailed maps of the area. The summary makes it much easier to understand how the details fit together.

The Montara Water and Sanitary District (which serves Montara and Moss Beach) has a moratorium on new water connections. And although it’s possible in El Granada to buy a County Coastside Water District water connection on the open market, but this can cost tens of thousands of dollars. Meanwhile, the county has continued to approve new development on the Midcoast by allowing builders of new houses to drill onsite wells.  However, both the MWSD and the private wells draw from the same sources of groundwater.

We’re working on an analysis of the data and conclusions, but here is our summary of study.

The county’s inadequate records of the wells they have approved on the Midcoast have made it impossible to asses the sustainability of Midcoast development.

The initial purposes of the study were to evaluate Midcoast groundwater conditions and assess the suitability and long-term sustainability of Midcoast ground- water supplies.  This was to include an analysis of the potential impacts of groundwater withdrawals on sensitive areas such as riparian and wetland habitats, and an estimation of "safe yield."  However, as the study progressed, it was determined that safe yield and groundwater/habitat relationships could not be accurately assessed due to the limited availability of well data, concerns regarding the accuracy of the data, and information gaps regarding surface water flows.

While Midcoast aquifers may have a surplus in years with average rainfall, they may be in deficit in dry and very dry years.

While most areas of the Midcoast are in "general long-term balance", the number of new houses planned by the county is likely to upset that balance and put the groundwater into deficit in dry years.