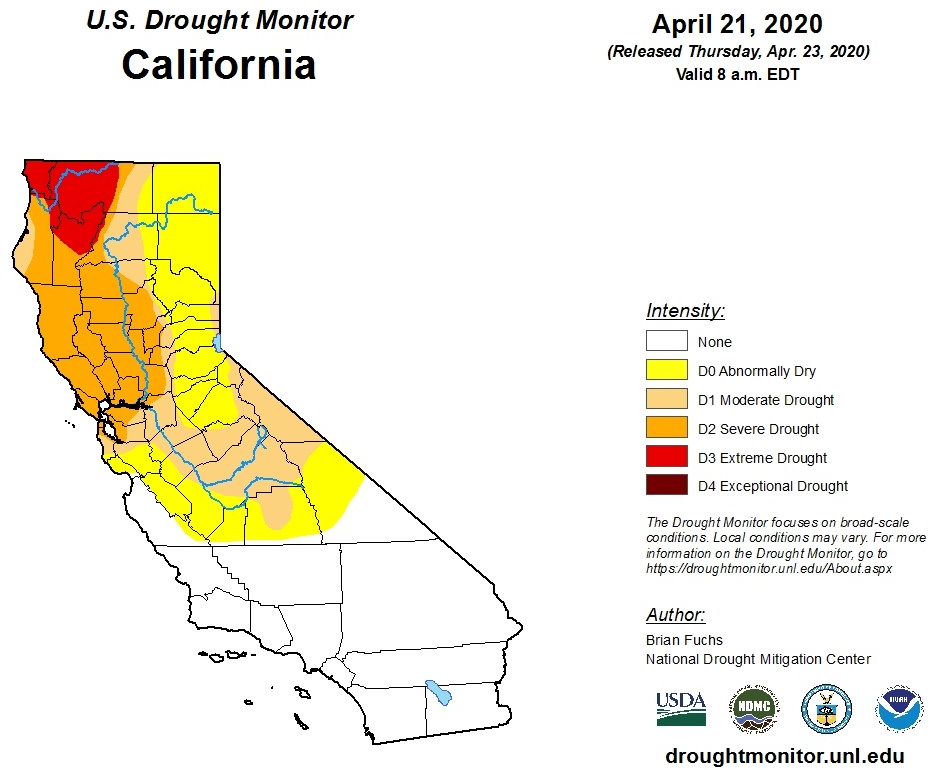 Daniel Swain at Weather West is forecasting drought and increased likelihood of large wildfires by mid-summer and into autumn for Northern California. In contrast, Southern California benefited from heavy rainfall over the last month or so.

The Coastside is experiencing Moderate Drought Conditions, while the drought in the East and North Bay and beyond is considered Severe.

In NorCal, though, conditions could not have been more different. Exceptional and in some cases record-breaking dryness continues across the northern third of the state, as it has since last autumn, and more moderate but still anomalously dry conditions extend southward to about the San Francisco Bay Area, the Central Sierra Nevada, and points northward. Recent rains were generally meager north of the Monterey Bay Area (outside of a few isolated downpours), and across much of NorCal the cumulative seasonal deficit has actually continued to grow in recent weeks. Statewide snowpack is currently around 56% of historical averages for the date–which, although quite low, actually represents a substantial improvement over the abysmally low values in February.

One consequence of this continued extreme dryness in NorCal is that the fire season will likely begin much earlier than last year (which had a pretty late start, due to a relatively wet and late spring). In addition, the NIFC is predicting a higher than average likelihood of large wildfires across NorCal by mid-summer–and I would expect that ultimately to be true into the autumn as well. SoCal may be a bit of a different story, given all the late rains and recent cool temperatures–I would not expect an exceptionally early start to the fire season down south (although hot and dry conditions this week could act to reverse some of these soil moisture gains).

Weather Monitor notes that the Drought Monitor “is not an entirely objective metric–there is subjective human input (based on reported on-the-ground impacts) that goes into making drought determinations, as well as objective indicators such as precipitation deficits and soil moisture levels.”