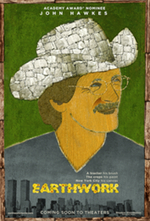 On Saturday, April 23, 2011, The Visionary Edge will present a sneak preview screening of Earthwork by director Chris Ordal.

Earthwork is the true story of real-life crop artist Stan Herd (played by 2011 Oscar nominee and Spirit Award Winner for “Winter’s Bone” John Hawkes, in his first starring role), told through a single episode of his life. In 1994, Stan traveled from Kansas to New York City and risked everything to create a massive environmental artwork on land owned by Donald Trump. The multi-acre piece was made from soil, rock, plants and vegetation near an underground railway tunnel. Stan recruited a number of homeless individuals living in the tunnel as his crew. Over the months it took to complete the earthwork, Stan dealt with the difficulties of bringing his unique, rural art form to an urban canvas and the many costs exacted upon his life. In an effort to show his unique perspective to a larger audience, Stan unexpectedly encountered the true meaning of his art and it’s ultimate, lasting rewards.

Shot almost entirely in rural Kansas (with a one-day shoot in New York City) on a minimal budget, Earthwork is Chris Ordal’s feature film debut. Ordal, a University of Kansas alum, was taken by Stan Herd’s dedication to his temporary art and found it the perfect story to tell through film, a permanent art form. “It was important to me that my first feature capture a story that needed to be told via the cinema. Stan Herd’s art is temporary, eventually returning to the earth after it has lived its life. Earthwork is an attempt to share the beauty and truth that Stan creates with an audience through a medium that can last forever. Stan has to get people into a helicopter or a tall building in order for them to see his work, so getting his art on the big screen finally allows audiences to experience his art and discover his incredible story.” The filmmakers were very determined to exemplify the spirit of Stan Herd throughout production, and thanks to an amazing and supportive crew, Earthwork was a production as “green” as the story it told.

From Chris Ordal, writer, producer and director: “I wanted to write a narrative that explored the artist’s life truthfully. There have been many films about artists made, but few about artists who aren’t household names. I grew tired of seeing a passionate person’s life reduced to 2 hours of a quick rise to fame followed by the pains of celebrity.  We see enough celebrity. I wanted the audience to discover a new artist and see things from a new perspective, one that I felt a much larger percentage of people could relate to.

Earthwork is not a biopic. It is one man’s true story of discovery told through a single episode of his life:  a collection of moments. It is a story that chooses to explore just one of Stan works in an attempt to understand why he has created so many over the years… and why he needs to keep doing so. A single work of art can convey far more truth than a smorgasbord of ideas, people, locations and time periods all trying to force meaning, so it was important to me that the big idea came from a small story. Everyone has some kind of vision they want out of their head and materialized in front of them, but everyday life tends to be a pretty solid gatekeeper. Of those few who are able to truly follow their dream, an even smaller percentage are able to survive long enough to turn that passion into an honest living. This to me is the real, true struggle of the artist . . . survival.

The further I dug into Stan’s art, the closer I came to discovering my own. I felt like there was more to the story than even Stan was aware of. Badgering him over the course of many months, researching and learning everything I possibly could about his art form, I gained enough of his trust to take him back to memories from his 9 month adventure of growing an environmental, rural artwork in the middle of a metropolis. As he reflected upon memories that he had pushed to the dark places of his mind, I was able to expand the significance of mere moments and encourage him to look at his “Countryside” earthwork as more than just a previous canvas from his portfolio. It was important to me that my first feature capture a story that needed to be told via the cinema.  Stan’s art is temporary, eventually returning to the earth after it has lived its life. Earthwork is an attempt to share the beauty and truth that Stan creates with an audience through a medium that can last forever, affecting an endless number of people… something people can experience together… something they can share.

Now Stan’s art, as well as my own, has been brought to light… projecting visions that once haunted us, transformed into a realized dream by the magic of inspiration, focus and, most importantly . . . people.” Reba Vanderpool of The Visionary Edge states “Earthwork has won 23 Best Film awards on the festival circuit and will be opening in theaters soon.  It is truly a privilege to do a sneak preview of a film of this caliber in our community before the rest of the world gets to see it!” (see list below) Earthwork is presented by The Visionary Edge. Sponsors include The UPS Store, Arrowhead Framing, and San Mateo Coast Properties.