El Niño may still lead to wet weather this year 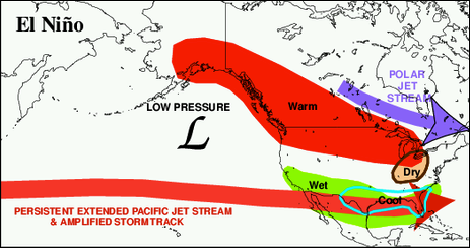 National Weather Service
This NWS chart from 2005 shows the "typical" effects of an El Niño on North American Weather patterns. The Bay Area is at the outer edge of the wet weather zone.

Some meteorologists say that the winter may yet get rainier, reports the Sacramento Bee in a story accompanied by a map which seems to tell a different story altogether:

"I’m not wringing my hands terribly much," said Tim Barnett, a climate researcher at the Scripps Institution of Oceanography in San Diego.

"Odds are good to see some pretty good storms later in the winter," he said. "How much rain, nobody can really tell you. All I can tell you is, it will be in the upper third of all the wet years."

John Monteverdi, a professor of meteorology at San Francisco State University, said he expects El Niño to begin showing its hand in California next week.

"There are lots of indications that a pattern shift is about to occur," he said.

A crucial point is that El Niño typically doesn’t deliver its punch until later in the winter. So it’s too early to fear a fourth drought year.

"I don’t expect a whopper," said Maury Roos, a hydrologist at the California Department of Water Resources. However, he added, "I’m optimistic we will wind up getting a fairly decent January and February, probably above average."

However, the National Weather Service seems a little diffident on whether the Northern California will see more rain. We seem to be between zones of higher and lower precipitation, and this is what is shown on the Sac Bee’s map:

For Montara you can track this years rainfall against last years by going to:

We are at a little less than 1/3 of normal for the ytd.  The averages differ from HMB through Montara and from west to east given the microclimates created by Montara Mountain and the coastal range.