End of the Line, Saturday 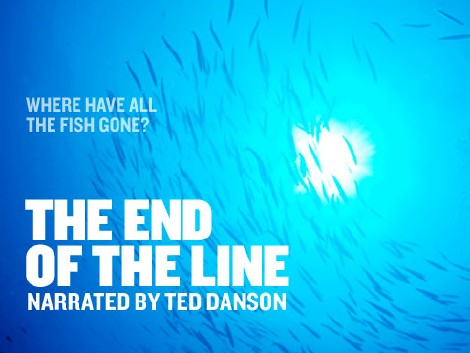 Imagine an ocean without fish. Imagine your meals without seafood. Imagine the global consequences. This is the future if we do not stop, think and act. On Saturday September 19th, The Visionary Edge will screen THE END OF THE LINE. The event will be co-hosted by and presented at the Community United Methodist Church in Half Moon Bay.

Saturday, September 19th. Doors will open at 7:00pm, event begins at 7:30 at the Community United Methodist Church, 777 Miramontes Street (at Johnston), HMB. The event is free; donations will be   accepted to cover the costs of screening. Call 650-560-0200 for information and reservations.

The End of the Line, narrated by Ted Danson, is the first major feature documentary film revealing the impact of over-fishing on our oceans, had its world premiere at the Sundance Film Festival in January 2009.

In the film we see firsthand the effects of our global love affair with fish as food. It examines the imminent extinction of bluefin tuna, brought on by increasing western demand for sushi; the impact on marine life resulting in huge overpopulation of jellyfish; and the profound implications of a future world with no fish that would bring certain mass starvation.

Filmed across the world – from the Straits of Gibraltar to the coasts of Senegal and Alaska to the Tokyo fish market – featuring top scientists, indigenous fishermen and fisheries enforcement officials, The End of the Line is a wake-up call to the world. Scientists predict that if we continue fishing as we are now, we will see the end of most seafood by 2048. The End of the Line chronicles how demand for cod off the coast of Newfoundland in the early 1990s led to the decimation of the most abundant cod population in the world, how hi-tech fishing vessels leave no escape routes for fish populations and how farmed fish as a solution is a myth.

The film lays the responsibility squarely on consumers who innocently buy endangered fish, politicians who ignore the advice and pleas of scientists, fishermen who break quotas and fish illegally, and the global fishing industry that is slow to react to an impending disaster. Says director Rupert Murray, "I don’t believe people should give up eating fish, but rather eat it carefully and with the respect the consumption of a wild animal deserves."

The End of the Line points to solutions that are simple and doable, but political will and activism are crucial to solve this international problem. Film director Rupert Murray traveled to some of the most incredible places on the planet and witnessed some amazing spectacles but heard the same story wherever he went.

In Gibraltar, which used to be a crucible of marine abundance and diversity, where two great oceans meet, the men of the three thousand year old Almadraba are staining the water with the blood of Giant Bluefin with ever decreasing frequency.

In the ancient inlets of Chesapeake Bay, which once greeted Captain John Smith with an abundance of marine life that hadn’t been witnessed in Europe for generations, even then, are now flooded with algae and plankton as the creatures that ate them have been removed.

Newfoundland, Nova Scotia, Senegal, Marseille, Newlyn, Lowestoft, and many other places they didn’t visit, have seen populations crash.  Where those places are, on their way down to the end of the line, determined their position in the film. Says Murray "We tried to tell one story, about one problem, affecting one global ocean. We found it was, tragically, the same for everyone."

"If you look at how simple and universally agreed the solutions are, that the fishing industry is a relatively small industry to regulate properly, that a global network of marine reserves would cost the same as the amount we spend on ice cream, then I believe you can remain hopeful and positive.  Healthy oceans are win, win, win, for fishing and coastal communities, for the health of our planet, for our diet, for our future. I want people to take away the fact that the ocean’s salvation is in our grasp."

"Reading the book The End of the Line changed my life and what I eat. I hope the film will do the same for others," said producer Claire Lewis.

Charles Clover, the book’s author, said: "We must stop thinking of our oceans as a food factory and realize that they thrive as a huge and complex marine environment. We must act now to protect the sea from rampant over-fishing so that there will be fish in the sea for our grandchildren and great-grandchildren."