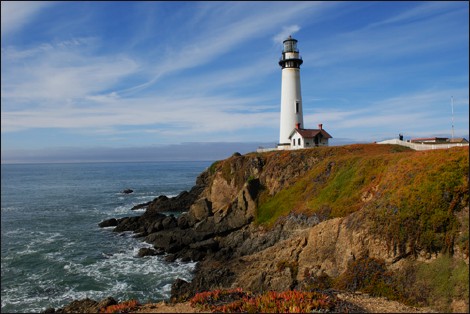 The Pigeon Point Lighthouse Hostel will host a special screening of the new independent feature film "Etienne!," at 8:00 p.m. on June 19. The hostel served as a shooting location for the film, which follows a young man who takes his terminally ill hamster on the bicycle road trip of a lifetime. Writer-director Jeff Mizushima, lead actor Richard Vallejos, and producer Giacun Caduff will be in attendance at the screenings.

Mizushima’s intention for the film was to tell this "tiny" story as if it were made in a different era. No sex, violence, or drugs—just a small and personable story about the relationship between humans and their animal companions. When Richard (played by Richard Vallejos) learns that his best friend, a dwarf hamster named Etienne, must be euthanized, he decides to take him out to see the world. The pair travel up the California coast, stopping along the way at picturesque spots including the Davenport cliffs, Henry Cowell State Park, and Mount Tamalpais.

"Etienne!" also stars Megan Harvey and Caveh Zahedi, and includes an appearance and performance by L.A. indie pop band Great Northern. The film makes its world premiere at the CineVegas Film Festival on June 12, and screens at the San Francisco United Film Festival on June 18. For more information about the film, visit www.hamstermovie.com.