Film about the 2 activists who gave American women the vote. 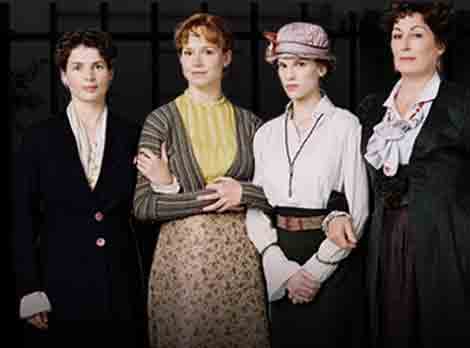 "An important history lesson told in a fresh, and blazing fashion."  Ebert and Roeper at the Movies.

From 1912 to 1920, a group of fiery young suffragettes led by Alice Paul (Hilary Swank) and Lucy Burns (Frances O’Connor) work together to pass a Constitutional amendment guaranteeing women the right to vote. Along the way, they incur the wrath of not only President Woodrow Wilson (Bob Gunton) but also many of the old guard suffragette leaders (Anjelica Huston and Lois Smith).

This is no dry period piece populated by one-dimensional figures out of a distant past. Director von Garnier has succeeded in imbuing the film with drama and humor, breathing life into the characters and relationships it depicts.  The movie received a standing ovation at its premiere at the Sundance Film Festival and a Golden Globe for Outstanding Achievement in Cinematography.

"Director von Garnier has created about as lively a rendering of the period and issues as possible. It is extremely well acted, features terrific production design, costumes and cinematography and contains a (remarkable) directorial control over theme and style." Kirk Honeycutt, The Hollywood Reporter.