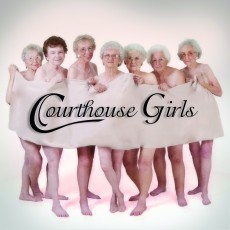 Courthouse Girls of Farmland, a lighthearted documentary that has raised both eyebrows and spirits throughout the country, will be presented by The Visionary Edge at 7:30 pm, Saturday, January 24th at The Johnson House Train Depot in Half Moon Bay.  The film focuses on the small town of Farmland, Indiana, seven senior women from the area who posed for a controversial 2006 calendar and a fight to save the historic county courthouse.

The award-winning documentary took root after the film’s producers, Salt Lake City writer and filmmaker Angela E. Soper and Farmland business owners Laurence M. Francer and Jerome M. Herron, witnessed reaction to a calendar they created in 2005 to protest local commissioners’ decision to destroy the 130-year-old courthouse.  Featuring Soper’s and Herron’s then 86-year-old mother and her six fellow bridge club members -aged 77 to 94- the "Courthouse Girls" calendar brought national attention to the courthouse issue and to the women.

Saturday, January 24th.  Doors will open at 7:00pm, film begins at 7:30.  The Johnson House Train Depot, 110 Higgins Purisima, HMB.  The film is free and open to the public, but donations are encouraged to cover screening expenses.  Suggested donation for advance tickets $10, door $15. Call 650-560-0200 for information and reservations as seating is limited.

Inspired by the British phenomena The Calendar Girls, the Farmland women, aged 77 to 94,  were photographed "suggestively" with porcelain replicas of the 1877 Italianate-style courthouse placed strategically in front of their bodies.  Appearing to be nude, the women’s photos stirred heated controversy in the community, generating outcries ranging from "geriatric soft-core porn" to brilliant.  The card-playing activists refused to buckle under the pressure and the building was ultimately saved.  Plans are now being assessed for renovating and expanding the old structure.  In addition, state legislation recently created a Courthouse Preservation Advisory Commission to investigate the need for preservation, restoration, and maintenance of other historic courthouses in the state.

"I’m always looking for themes that demonstrate how each of us can make a difference," says Reba Vanderpool, founder of The Visionary Edge, "and this film does just that with a delightful touch of humor. These women raised $45,000.00, stopped the demolition of their local courthouse, and inspired new legislation to protect and renovate courthouses throughout the state of Indiana."

Klein stated "So many of us never created necessary change in society in our youth, and I think as we get older we start asking ourselves, ‘Not if, but when?’ I was really impressed by these women and their courage to-literally-put themselves on the line for a cause they believed in. And as a man who grew up in New York City, I was intrigued with this tiny town and everything Historic Farmland USA has done to keep the town from dying. I feel like other communities can learn from it."

The town of Farmland and its delightful Courthouse Girls have proven von Goethe’s words correct: Boldness does have genius, power, and magic in it. They’re also proving that "old ladies" can be gutsy and beautiful, and that small town life need never be mundane.  In fact, it can be downright exhilarating.