Director Barry Ptolemy's compelling feature-length documentary, about the life and ideas of controversial inventor and futurist Ray Kurzweil.  The focus of the film is Kurzweil's prediction that humankind is quickly approaching a moment of "Singularity" - the time when human and machine intelligence will merge to create a joined organism that is much smarter than the sum of its parts. 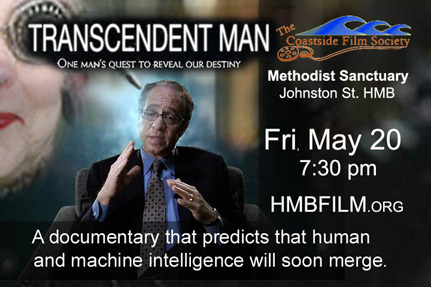 Kurzweil theories can’t be easily dismissed out of hand. He has just too long a track record as a prescient tech pioneer.  He has been a leader in the fields of optical character recognition, text-to-speech synthesis, voice recognition, and artificial music.  Musicians will recognize the Kurzweil synthesizer as the first keyboard capable of generating artificial music that sounds like the original - a single machine that can toot like a trumpet, swing like a piano, and thrill like saxophone.

Kurzweil is not only predicting that we will see a merging of mind and machine by the year 2030, he says this merger will provide us with the smarts to start tackling mankind’s most profound limitations. In Kurzweil’s new world, disease, aging, hunger, poverty, and even death will be soon conquered by the super mind. Kurzweil is personally planning to stick around long enough to see the reanimation of his late father—cloning his Dad’s body and inserting an artificial intelligence he creates from his own memory of dear old dad.

The movie delves deeply into the social and philosophical implications of Kurzweil’s world of “Singularity” both through Kurzweil’s own words and though interviews with the likes of Colin Powell, Wired co-founder Kevin Kelly, 3Com and Metcalfe’s founder Robert Metcalfe, evolvable hardware researcher Hugo de Garis, Segway inventor Dean Kamen, and Kurzweil’s friend Stevie Wonder. There is an attempt to balance Kurzweil ebullient confidence of the better world to come with other more cautions points of view.  Iconic American composer Philip Glass contributes the original music used in the film’s score.

“Whether Kurzweil is a good salesmen of his ideas is irrelevant here because of how entertaining they are. He’s the intellectual equivalent of a Michael Bay explosion. That’s not meant to belittle the subject matter though. The answers he’s come up with lead to the kind of questions we’ve always asked ourselves, and they demand that we re-frame them to make sense of the world we live in currently. .. Now who wants to live forever?”
Cole Abaius. FilmSchoolRejects.com


More info and a trailer at: www.HMBFilm.org