Film with a perspective on China any parent can appreciate.

"Last Train Home is the best kind of documentary filmmaking:  transportive cinema that takes viewers to a place they never much  considered, immersing them in experiences they never knew existed." Mike Scott, Times-Picayune 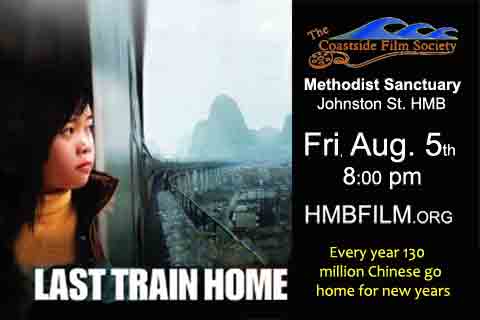 The Chinese industrial revolution is fueled by the labor of hundreds of millions of Chinese workers who leave home and family to take jobs in the factories that circle the big cities. Most of these workers get a single vacation each year - during the week-long celebration of Chinese new years. The result is the world's largest human migration, a week when an unfathomable 130 million human souls cram into every available mode of transport to grab a week of family time. The shots of this mad migration at the beginning of the Last Train Home are majestic and overwhelming.

The bulk of the movie focuses on the life of one Chinese couple. Fifteen years ago Zhang & Chen left their young children in the care of grandma to take low-paying jobs in a factory a thousand miles away. They live in a dorm with no privacy, bent over sewing machines from dawn to dusk, to earn enough money to pay for a good education for their kids.  Canadian director Lixin Fan follows the family for three years as the now teenaged kids gradually detach from the life goals their parent have set for them.

"A film that tugs at your heartstrings, opens your eyes, and makes you feel incredibly lucky"  Times-Picayune

More info and a trailer at: www.HMBFilm.org