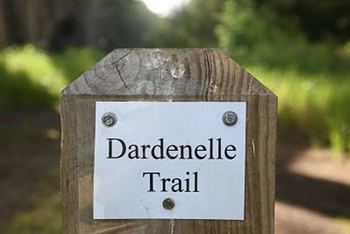 This post has been updated with details on a second walk and more information about the planning process.

This Sunday, August 8, 2010 at 10:00am and 2:00pm, the board of Midcoast Park Lands is conducting a walk from the parking lot of the Moss Beach Distillery to the Montara Light House.  The primary purpose is to walk the trails in the Fitzgerald Marine Reserve where proposed trail improvements are under review (PLN2010-00183).

This is an opportunity to view story stakes of the proposed trail location, trail width (14’ wide), bridge location and scale of the proposed bridge (12’ wide x 60’ long).

The Negative Declaration comments will be an agenda topic at next week’s MCC meeting [MCC].

The optional full walk goes from the north end of de-commissioned Ocean Blvd. to the Montara Light House.  This path affords an opportunity to view potential routes, views and issues involved with completing a route for the California Coastal Trail and a Bicycle Route from Pillar Point to the Montara Light House.  The walks will be led by Len and Gael Erickson and will leave the Distillery Parking Lot at 10:15am and 2:15pm.

Please give consideration to the harmful and toxic effects of Polycyclic Aromatic Hydrocarbons. The proposed Fitzgerald Marine Reserve asphalt surfaces on the bridge (12’ wide x 60’ long) and trail (14’ wide) would drain directly into San Vicente Creek and increase the water pollution already documented.

San Mateo County 2009 Beachwater Contamination Results are the second worst in the state. Los Angeles County is the only County in California with more beach closing/advisory days than San Mateo County.

The Fitzgerald Marine Reserve had 59 water contamination closing or advisory days at San Vicente Creek in 2009.

The Half Moon Bay segment of the California Coastal Trail was coated a few years ago with a black, shiny emulsion and the vegetation near the trail was covered in the black messy coating for months. Sealcoating runoff is toxic to mammals, birds, fish, amphibians, invertebrates, and plants and should not be allowed to drain into San Vicente Creek.

“Collaborative studies by the City of Austin and the U. S. Geological Survey (USGS) have identified coal-tar based sealcoat—the black, shiny emulsion painted or sprayed on asphalt pavement such as parking lots—as a major and previously unrecognized source of Polycyclic Aromatic Hydrocarbon (PAH) contamination.”

“PAHs are toxic to mammals (including humans), birds, fish, amphibians, invertebrates, and plants. Aquatic invertebrates, the insects and other small animals that live in streams and lakes, are particularly susceptible to PAH contamination, especially the bottom dwellers (benthic invertebrates) that live in the mud where PAHs tend to accumulate. They are an important part of the food chain and are often monitored as indicators of stream quality (analogous to the “canary in the coal mine” concept). Possible effects of PAHs on aquatic invertebrates include inhibited reproduction, delayed emergence, sediment avoidance, and mortality, and possible adverse effects on fish include fin erosion, liver abnormalities, cataracts, and immune system impairments.”

ADA Trail Surfaces are not limited to asphalt.

“Other natural surfaces may also become firm and stable when combined with a stabilizing agent. Wood planks, stone, grass, and packed dirt may also be considered accessible. The degree of firmness and stability may vary depending on the intended use and the expected direction and length of travel.”

US Access Board is an independent Federal agency devoted to accessibility for people with disabilities. Created in 1973 to ensure access to federally funded facilities, the Board is now a leading source of information on accessible design.

This push for a paved road on a different route is much ado about something else.

Thanks to everyone who joined the walk this morning.