Friday is a magical Film Night in Half Moon Bay 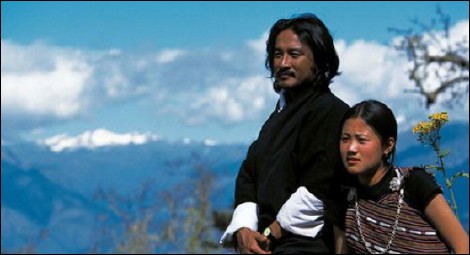 The Coastside Film Society presents "A film so enchanting one hates to see it come to an end."—Kevin Thomas, Los Angeles Times

Travellers & Magicians (108 minutes) Deep in the Himalayas, in the Buddhist kingdom of Bhutan, two men seek to escape their mundane lives. Dondup is a university graduate who hopes to dump his job as a government official and emigrate to the USA, the land of his dreams.  He plans to support himself in the US by working as a farm laborer. While waiting for the bus out of town he bumps into a monk who responds to Dondup’s comments by spinning the tale of Tashi, a handsome young apprentice magician, who is just as frustrated with his own life as Dondup is with his.

The film deftly cuts back and forth between the tales of these two restless young men, both with girls on their mind, both with a deep longing to discover a world of more fun and action, and both so preoccupied with their own concerns that they can’t appreciate just how lucky they are.  Advisory: This film contains scenes of sensuality.

Director Khyentse Norbu became an international star with the release of his first film "The Cup", which was shot in India. For his second film Norbu decided to return to his homeland of Bhutan.  Bhutan is a remote land, that ranks as the happiest country in all of Asia, and is so beautiful it provided the inspiration for the fictitious Shangrila of James Hilton’s novel "Lost Horizon".  The government of Bhutan has deep reverence for culture and tradition. It discourages outside influences that don’t add to the country’s "Gross National Happiness".  As a result, no film had ever been shot there.  But Norbu has connections.  Norbu’s full name is His Eminence Dzongsar Jamyang Khyentse Rinpoche. This makes him one of the most important incarnate lamas in the Tibetan Buddhist tradition and a member of one of Bhutan’s most noble families. Sometimes it is not just who you know, it is who you are the makes the difference.