Reprinted with permission from the Half Moon Bay Historical Association newsletter.

Among the strangest of Coastside stories is how Half Moon Bay’s old mill played a key role in the creation of the city of San Francisco. The water used to power the Spanishtown mill’s water wheel led to developing San Francisco’s gigantic Hetch-Hetchy aqueduct system.

San Francisco was an outpost for the Spanish, and later, the Mexican, nation. In 1849 it became the gateway for the Gold Rush. The City was growing at a furious pace. As gold became harder to find, the magnetism of the West attracted the American pioneering spirit. Available was the opportunity for a new life and land ownership. Thus, the City continued its growth as California became American territory.

San Francisco had only small springs for fresh water. Early on, water became scarce. People bid against each other to buy water for their homes, businesses, bars, and hotels. It was so precious, it was sold by the barrel – at increasingly outrageous prices. In addition the supply system was so primitive, water was often delivered by horse and wagon.

Thirty miles or so to the south, the Mexicans who had owned and governed California until 1848, scattered to ranches on enormous land grants. One such grant was named San Benito. Americans called it “Spanishtown.” It began life as a ranchero, owned by the Miramontes family. Today, it is Half Moon Bay. In 1860, Melvin Halstead and his brother built a mill

in Half Moon Bay, on the banks of Pilarcitos Creek. It was near the town’s Main Street, just behind the large Miramontes adobe home. Today’s Mill Street that intersects Main gets its name from the mill.

Pilarcitos Creek was a big water source, as it drops out of the coastal mountains into Spanishtown. The sturdy little mill stood upon the bank of Pilarcitos Creek and used the power of that stream to turn its large, thirty-two foot water wheel, providing the power needed to grind the grist into flour. Immediately after as the Halsteadt brothers began to produce their flour, representatives came to them offering to buy their property and the mill. Some say the offer was presented by the local, wealthy politicians, James Denniston (Denniston Creek, near El Granada is named after him), and Josia Ames (Amesport is named after him). However, the real buyer was the Spring Valley Water Company, an enterprise well connected financially and in California State politics. The company was really interested only in the water rights – not in the Halstead’s mill.

Once the legal framework for water rights was completed, Spring Valley brilliantly engineered an aqueduct system, and built two dams, one small and one quite large, in the coastal mountains. Most of the water that had been coming entirely to Spanishtown was now piped miles away - off to San Francisco. That was only the first step in San Francisco’s historic water program. 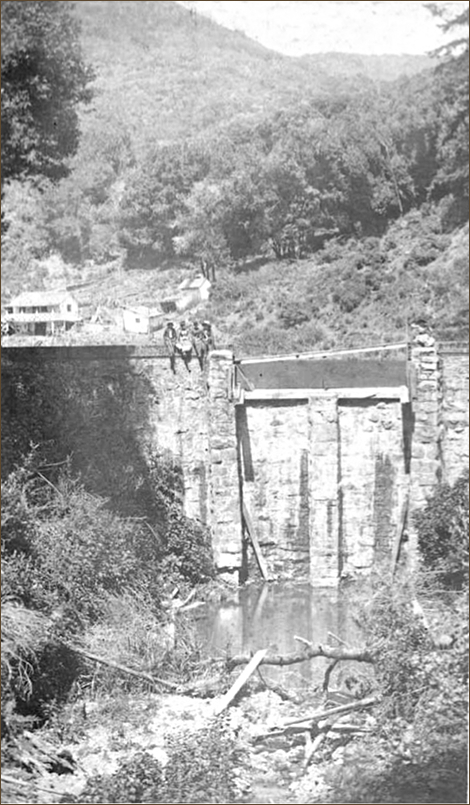 Because the subject of this photo is the answer to the HMBHA newsletter quiz, you’ll have to mouse over the picture to see what it is. No cheating.

Pilarcitos was merely a pilot program – an experiment. Its success led to a much bigger solution. Spring Valley next dammed all of the valley formed by the San Andreas fault. The San Mateo Dam formed what we know today as Crystal Springs Reservoir. Yet even that was but another small step compared to their final effort.

Needing still more water to keep up with its growth, the City of San Francisco built the great dam and water transport system known today as Hetch Hetchy. They dammed water in the Sierra Nevada Mountains, piped it al the way across the state into Crystal Springs, and then on to San Francisco. After decades of negotiations, San Francisco finally purchased the Spring Valley Water Company in 1930 for $40 million, bringing all of the company’s lands and other assets into public ownership, and unifying the water supplies, which would fuel the region’s growth.

Today, Pilarcitos Reservoir is part of the San Francisco regional water system serving the City of San Francisco and 1.7 million people in the Bay Area. Also included are the residents of Half Moon Bay, El Granada, and Princeton although Half Moon Bay still gets much of its drinking water from Pilarcitos Canyon. Because the Spring Valley Company bought Halsteads’ mill, we now buy water from San Francisco.

But Mill Street remains, and it reminds us of this peculiar footnote to the history of San Francisco and Half Moon Bay