HMB roads among the worst in the county 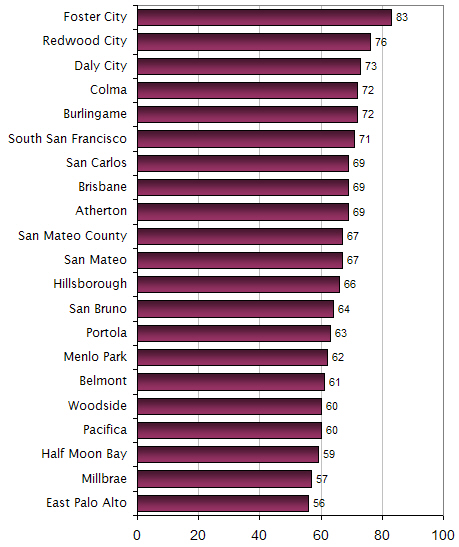 With a pavement condition index (PCI) of 59, Half Moon Bay’s roads are worse than those of just about every city in the county, except Millbrae and East Palo Alto, according to a ranking [pdf] by the Metropolitan Transportation Commission. The MTC classified the city’s roads as "at risk".

PCI scores of 90 or higher are considered "excellent." These are newly built or resurfaced streets that show little or no distress. Pavement with a PCI score in the 80 to 89 range is characterized as "very good," and shows only slight or moderate distress, requiring mostly preventive maintenance. The "good" category ranges from 70 to 79, while streets with PCI scores in the "fair" (60-69) range are becoming worn to the point where rehabilitation may be needed to prevent rapid deterioration. Because major repairs cost five to 10 times more than routine maintenance, these streets are at an especially critical stage. Roadways with PCI scores of 50 to 59 are deemed "at-risk," while those with PCI scores of 25 to 49 are considered "poor." These roads require major rehabilitation or reconstruction. Pavement with a PCI score below 25 is considered "failed." These roads are difficult to drive on and need reconstruction.

"All around the Bay Area, and especially in our rural areas and older cities," noted Dodd, "we see a lot of streets and roads with PCIs below 60, which is the point when pavement begins going downhill fast. One of our priorities is to make sure we invest in both preventive maintenance and in rehabilitation."

San Mateo County roads finished in the middle of the pack, but the roads in the unincorporated Midcoast are almost certainly worse.