In the mood for some zany French Dadaism this Friday? 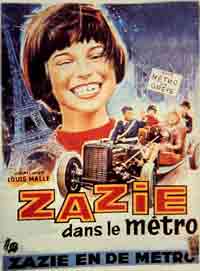 "Are you in an agreeable mood to have your leg pulled right out of its socket by a practical joker with a movie camera? Then you may just be ready for "Zazie," an elaborate French exercise in cinematic Dadaism." Bosley Crowther. New York Times (1960) 92 mins.  French with English Subtitles

Zazie is a frenetic comedy & social satire by the great French director, Louis Malle. The film stars Catherine Demongeot as a sassy 11-year-old dumped for the weekend with her strange uncle Gabriele.  She takes off on a madcap adventure though the Paris her uncle loves.

Some reviewers see the film as little more than a zany comedy. Others see it as a indictment of the excesses of the 1960’s as viewed though the uncritical eyes of its young star.  At the time, some even found the film shocking because of Zazie’s potty mouth, obvious delight in causing the maximum amount of mayhem, and the fact that she was unloaded on an uncle who works as a female impersonator.

"The film is constantly one step ahead of the audience, always just a little bit smarter than we are. We expect a story about a child to be more fantastic and dare I say zany than a story about adults, and Zazie in the Metro exploits that expectation, leading us to first laugh at the film and only realize the implications of what we’re laughing at moments later."  Tim Brayton, Antagony & Ecstasy