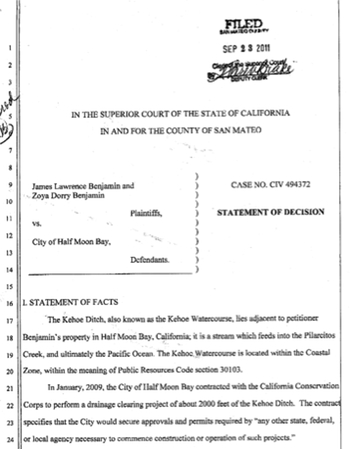 The city of Half Moon Bay has been fined for clearing vegetation in a riparian corridor in violation of the Coastal Act.

In February 2009, the city cleared about 2,000 feet of the so-called Kehoe Ditch, also known as the Kehoe Watercourse. City workers used a chainsaw and weed whacker to clear several arroyo willow trees and two truckloads of vegetation. The city didn’t have the Coastal Development Permit required to perform the work.

The court found that the Kehoe Watercourse contains habitat for the California red-legged frog and San Francisco Garter Snake, both rare and endangered species, and that the city itself had designated the watercourse as a “riparian buffer zone”.

The suit was filed by former Half Moon Bay Planning Commissioner Jimmy Benjamin. Several local agencies, as well as Benjamin, had notified the city as early as 2005 that the watercourse contained environmentally sensitive habitat.

The court described the reasoning of city Planning Director Steven Flint that the site did not contain Red Legged frog or San Francisco gartner snake because “none had ever been seen there” as “untenable”. It also described his reasoning that the watercourse was not a riparian corridor as “untenable and illogical”.

The court also found that the damage to the environment was “not substantial” and fined the city the maximum minimum statutory penalty of $1,000 for “each day the violation persists”.

The decision was reached on September 15, but released to Benjamin’s attorney on Thursday, November 10.