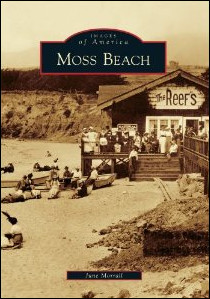 The book that June Morrall was completing at the time of her death,  Moss Beach, is now available. June Morrall explored the history of the community with more than 200 vintage photographs. From the press release:

The developers of the Ocean Shore Railroad envisioned Moss Beach as one of a string of resorts along the San Mateo County coastline. The railroad did not endure but the automobile era brought prosperity to the secluded area, which hummed with activity during Prohibition and became a strategic and controlled location during World War II. Early settler Jurgen Wienke, who built the original Moss Beach Hotel in the 1880s, would be amazed at how this little town has evolved. Abundantly endowed with natural beauty, the Moss Beach of yesterday can still be discovered today.

The book is available at Coastside bookstores.